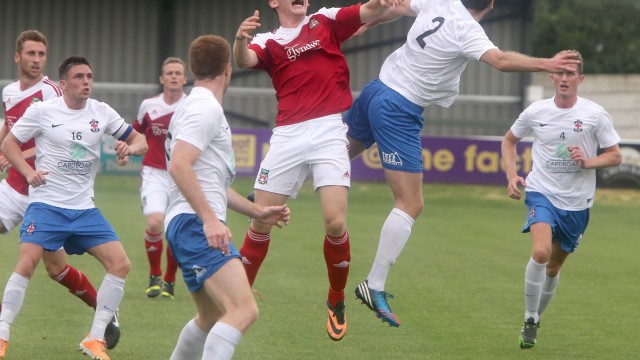 The Coasters came unstuck at home to higher league opposition for the second time this summer falling to another narrow 2-1 defeat, this time to Conference Premier side Wrexham.

It was a tight game for long periods but Fylde boss Dave Challinor thought his side could have got a bit more from the game than they did: “Even though it was opposition from a higher league I still didn’t think we showed our best and there’s still plenty more improvements to come.

“But, now’s the time when we need to start stepping up and getting to those levels that we need to be at.  Obviously results are not really important but I still want to try and win as many games as we can and I think we were unlucky not to get anything out of it.”

The Coasters started the stronger and Danny Lloyd was unlucky not to find someone free in the area with a great cross that wasn’t capitalised upon.

Soon after, some good build-up play between new signing Michael Potts and Matt Blinkhorn allowed Lloyd to race through the middle, but his final shot was sent well wide of goal.

Lloyd was then played in by Liam Tomsett to send another searching cross into Wrexham’s area but it was agonisingly too far ahead of Blinkhorn on the edge of the six yard box.

But Fylde did take the lead on 27 minutes when defender Tom Hannigan scored his second goal in as many games – Tomsett sent a corner into the area and Hannigan was able to find space to head in from 12 yards.

That setback kick-started the visitors almost immediately, threatening with a well worked cross from Theo Bailey-Jones that was acrobatically cleared out of the area by Luke Denson, but they got their equaliser just six minutes after going behind.

Connor Jennings got the final touch in a scramble around the six yard box after goalkeeper Ben Hinchliffe parried away Louis Moult’s close-range lob only to find Jennings 12 yards out and his flick-on bounced over Hannigan before crossing the line as Adam Sumner blasted the ball into the roof of his own net trying to clear it.

Fylde created a couple of half chances to retake the lead late in the first period but just 64 seconds into the second half, Moult met Wes York’s low cross to divert it into Fylde’s net from six yards to give the Conference Premier side the lead.

The second half was punctuated with the usual pre-season rule of making countless substitutions as both managers made up to eight changes, but that didn’t stop the game flowing well with further chances falling to both sides.

Richie Allen couldn’t quite reach the return ball from Lloyd after playing a clever one two on the edge of the box on 51 minutes and 10 minutes later, Moult and York sent efforts wide of the mark for Wrexham.

The best chance came with ten minutes remaining though when Jonathan Royle had to head the ball against his own bar to stop a cross reaching its target following some good build up by Fylde and the resulting play saw the ball end up on the roof of the net.

Managers will always say that results are never important in pre-season and it’s about building up the match fitness and gaining some game time after the off season but it was a decent performance from the Fylde boys who should be confident of being able to mix it in the higher league.

However, Challinor was disappointed with the way his side conceded the two goals adding: “For the first goal it was a catalogue of errors that lead up to it.  We had possession of the ball in their half of the pitch and two bad decisions lead to us being one-on-one.

“And, again, for the second goal we had possession around the half way line, gave the ball away and within ten seconds they had the ball in our net.”

Fylde’s next game is away to Curzon Ashton on Saturday, 26th July (KO 3pm).