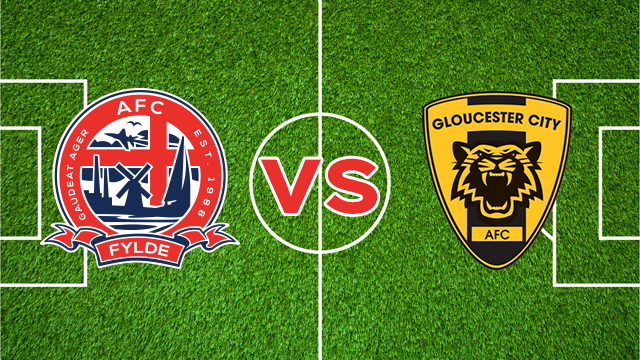 The Coasters moved top of the Vanarama Conference North after a 2-0 away win at Gloucester City thanks to goals either side of half time from centre half Tom Hannigan.

Hannigan, who has had a solid start to his Coasters career bundled the ball home from a yard out from a corner just before the half time whistle, and then his thumping header on 51 minutes killed off Gloucester and made sure that The Coasters came away from Gloucestershire with all three points.

It could have been a different story however, as there wasn’t much between the two sides. The game itself was littered with mistakes from both teams and neither really took advantage. Gloucester started the brighter and forced a couple of corners in the first five minutes, and Charlie Griffin, who was the league’s top scorer before this game, had a header that went just over the bar inside the opening 10.

Mike Barnes then had a tame effort saved by Mike Green in the Gloucester net before a diving header from Richie Allen nearly crept in at the near post from a terrific Michael Barnes cross. Danny Rowe went even closer to opening to scoring when his effort was cleared off the line after 24 minutes, and the Fylde striker was unlucky not to score for the second time in two minutes after he got another chance, but it was tame and easily saved.

Charlie Griffin has a header saved easily and then Danny Rowe had another chance but neither side really took their chances in the first half. Richards and Groves both went close to opening the scoring for the home side but there were numerous home attempts over the course of the game that found their way over the bar. Then came the opening goal for The Coasters, with Tom Hannigan scoring from a yard out. Fylde forced a corner late on and when it wasn’t dealt with, Hannigan was there to pounce to score although a lot of the home fans thought he was offside. Never-the-less, The Coasters went 1-0 up going into half time.

The first five minutes after half time indicated that the home side looked likely to equalize, with Sam Avery’s header just over in a great chance for them to get back to level terms.

Adam Sumner flew forward on the counter attack after a Gloucester corner, his pass fed Danny Rowe but his shot went just wide. Rowe then turned provider for Allen but his effort was kept out by keeper’ Green. Liam Tomsett headed another effort just over from a Sumner cross just after the hour mark and it was one way traffic.

The home side brought on Chris Jones  just after the hour and his introduction sparked something in the home side’s blood in the last 15 minutes. First, Marc Richards ambitious volley was hit well over the bar and then Connolly had an effort way over. Next up was Billy Jones’ free-kick but it sailed just over, much to the relief of Hinchliffe in the Fylde goal. More efforts from Jarvis, Connolly, Wilson and Jones promised much but failed in quality.

Thankfully, The Coasters battled through the final period and came away with a well fought 2-0 victory which sees them move above Chorley into first position in the league table.

Boss Dave Challinor had this to say;

‘Obviously we’re delighted to win. We’ve played better than today in the past and come away with nothing so the important aspect is that we’ve won the game. You can’t play well every game and it’s a sign of a good side when you don’t play well and win. It just so happens at the moment that when we are playing well, we win them too’.

‘There will be some rotation to keep the squad fresh. It’s made my job very easy so far as the 11 players I’m picking to start the games are all doing good enough jobs to keep their place and we find ourselves top of the league table because of it’.

‘We’ve got a week until the next game and no more midweek games for a few weeks so the lads can rest up midweek. We may rotate in the F.A Cup and everyone is chomping at the bit to get a chance to start. We had to make changes during the game today to suit the game and to protect our two goal advantage. Winning today in the manner that we did indicates that there is still a lot to come for us this season’.

The Coasters next game is at home to Worcester City on Saturday 20th September.

Man of the Match – Tom Hannigan