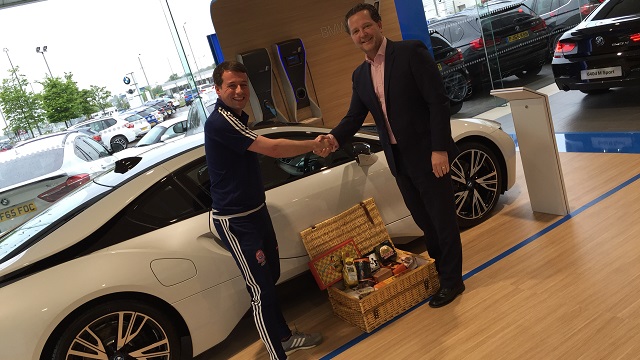 Paul Bowker of Lytham was the lucky winner of a special hamper kindly donated by the AFC Fylde Community Foundation at the St George’s Day Charity Festival.

Over 450 people entered the competition to win the hamper, which contained a range of luxury foods, wines and exclusive gifts.

The festival raised over £80,000 for two worthy causes, ABF Solider’s Charity and Trinity Hospice, and broke all attendance records from previous years.

Prize winner Mr Bowker was drawn at random from the hundreds of entrants and said: “I’m delighted to have won the prize. It was a great weekend overall and all in aid of very good causes. Coming away with a fantastic prize was just the icing on the cake!”

Foundation director Tom Hutton said: “The AFC Fylde Community Foundation is immensely proud to be supporting such a worthwhile event, as The St Georges Day festival is. I hope Paul enjoys the hamper, which is full of treats for all the family.”

The Foundation played a major role in the festival, taking part in the opening day parade before hosting a hugely successful football tournament with 18 teams of youngsters from the local community.