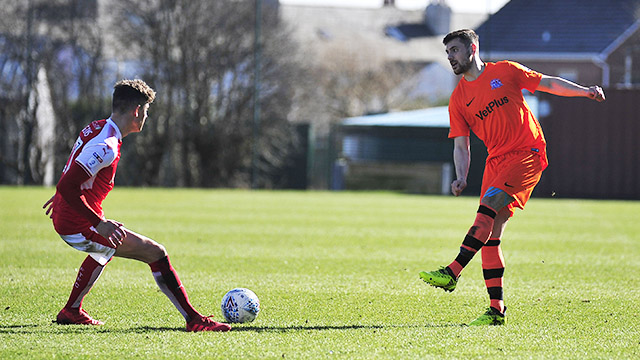 Flores hopes to blossom with Fylde!

AFC Fylde new boy Jordan Flores is keen to blossom with the Coasters following his loan move from Wigan Athletic.

The 22-year-old midfielder, who can also fill in at left-back, will team up with the Coasters until April 4th.

Flores, formerly a season-ticket holder at Wigan, came through the Latics’ academy system and netted a cracker on his debut as a teenager against Fleetwood Town in 2015.

The skilful midfielder spent time on loan with Blackpool last season, making 17 appearances and scoring three goals as the Tangerines were promoted to League One via the play-offs.

Flores, who also enjoyed a short spell on loan with Chesterfield at the start of this season, becomes the fourth player to join the Coasters on loan from Wigan this term, joining defenders Luke Burke and Sam Stubbs and young goalkeeper Theo Roberts.

He made his Coasters debut this week in the Lancashire Senior Cup against Fleetwood Town and is now keen to get his season back on track after injury.

Flores said: “I knew this was a club going in the right direction. They have climbed up through the league and they are so close to the Football League. From first impressions it’s a very good club.

“A few of the Wigan lads are already here and it’s good to know someone to show you around and introduce you to people.

“Fylde did very well against Wigan in the FA Cup and were probably unlucky not to got through in the end so they have proved they are a good club on and off the pitch.

“Personally I need game time. I had a good start to the season with Chesterfield, but that was cut short due to injury.

“I’m fit again now and I need to get some games under my belt. If I can combine that with helping Fylde push for the play-offs then that’s exactly what I am looking for.

“Ultimately the aim is to get myself into that Wigan team in the near future. I signed a new deal at the start of the season but unfortunately the last few months haven’t gone to plan due to injury.

“Hopefully a decent spell here will put me back into contention for next season.”