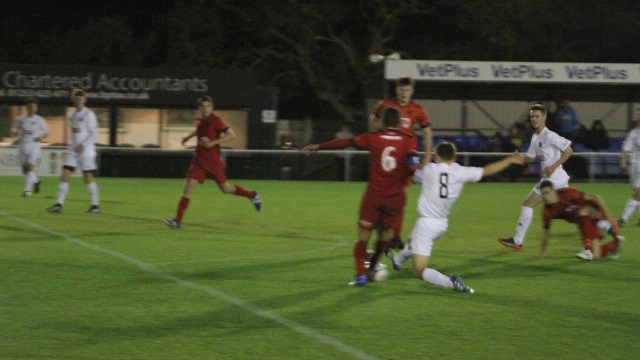 AFC Fylde’s youngsters cruised through to the third qualifying round of the FA Youth Cup with a comfortable 4-1 victory over rivals Barrow.

Two goals either side of half-time in a dazzling display was enough to secure passage to the next round of the competition.

Under the watchful eye of first team manager Dave Challinor, Fylde started brightly with forward Sam Rigby presented with the first meaningful chance of the match when a loose ball found him on the edge of the area but goalkeeper Charlie Foster did well to turn his well struck strike around the post.

The Coasters were limited to long range efforts in the early stages as Serhat Tasdemir looped a 25-yard drive over the bar.

The deadlock was broken on nine minutes when full-back Tom Billington raced down the right and fizzed an inviting ball across goal for Tasdemir to tap home at the far post.

The hosts deservedly doubled their lead after 16 minutes when Alex Ashby’s cross was expertly brought down in the box by Jack Foster and smashed left-footed past the helpless goalkeeper.

Barrow created little in the way of goalscoring opportunities but halved the deficit midway through the first period when Ben Stoker was cleverly played through and the frontman slid the ball into the bottom right hand corner.

Fylde’s Ian Moss tested the Barrow stopper with a free-kick as the break approached but Foster was equal to his curling effort.

The hosts really should have restored their two-goal cushion on the stroke of half-time when Billington found Rigby with a low cross but Foster pulled off an outstanding save at point-blank range to keep the Coasters at bay.

Fylde picked up where they left off after the break with Foster firing a long-range strike narrowly over following a jinking run.

Barrow hit back with a glorious chance of their own however Coasters stopper Nicholas Scarf’s reaction save prevented Tom Unwin from heading home at the back post.

The home side had their two-goal advantage back on the hour mark when left-back Ashby was the first to react to a dropping ball in the area, lashing the ball home from ten yards.

The Coasters added a fourth minutes later when the lively Foster bombed down the right flank before cutting inside and firing low into the far corner.

Ashby went close to putting the tie to bed but was unlucky to see his powerful effort crash back off the inside of the far post.