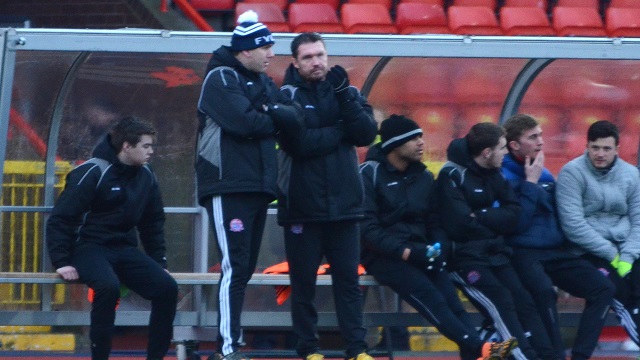 The Coasters were beaten 1-0 at the International Stadium, but Challinor didn’t think there was much between the two sides.

“We are very disappointed to be out of the competition, but I don’t think there was a massive amount between the sides. They changed their system after the break and stopped us getting out and being able to play.

“Their goal didn’t come from a particularly good piece of play, it was just from some sustained pressure, but they never really ripped us apart at any point.

“They kept us penned in and I guess that’s the difference in levels that we are both at. We know the areas in which we need to improve to compete at a higher level. We need to evolve and develop and I’m sure we can do that with the personnel that we have, but against the better sides we need to learn how to release the pressure.

“I thought we were very comfortable in the first half and most of the chances and attempts on goal came our way. So it was credit to ourselves that they had to change their system.

“You are never going to be on top for a full game, especially against a team in the division above us. We just hoped we would take one of those chances when we were on top and we have been punished for not doing that. Gateshead are experienced and they are on a very good run at the moment, but in all honesty the game could have gone either way.

“We are playing two games almost every week at the moment and that’s difficult when you are part-time. There were some tired bodies out there and it started to show towards the end.”

Gateshead manager Neil Aspin told gateshead-fc.com: “I felt I needed to change it at half-time. Fylde had a lot of the ball in the first-half. We needed to get closer to them and put them under more pressure and we did that in the second-half.

“We started with a 4-4-2 and changed to a 4-3-3, just so we could get to grips with their formation. We were finding it difficult to get in their faces and close them down.

“At the end of the day, it’s about getting through to the next round. You’d like to win comfortably and play attractive football in every game, but this was a cup tie.

“I’ve seen Fylde play on a couple of occasions. They’ve got some good players and they can certainly pass the ball and keep possession. I knew it would be a difficult game.”