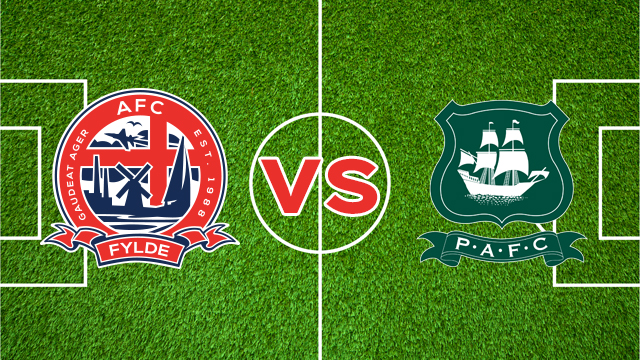 The Coasters go into their F.A. Cup First Round tie away at Plymouth Argyle on the back of a league defeat away at Boston United, but previous to that, Fylde had gone 14 games unbeaten, including 12 wins.

Fylde have got to this stage of the F.A. Cup after defeating Buxton 1-0 in the Third Qualifying Round a few weeks ago, and then nearly two weeks ago, The Coasters saw off Kings Lynn 4-3 in the Fourth Qualifying round to reach the First Round proper for only the second time in the club’s history.

Since the 5-0 demolition of Colwyn Bay in late August, Fylde have been extremely impressive in the league and at one stage were five points clear of any other team at the top of the league table, but the defeat last Saturday has seen The Coasters move down into second position ahead of one of the most important and most eagerly anticipated games in AFC Fylde history.

The Coasters started off their FA Cup run by seeing Bradford Park Avenue in round two of qualifying in a reply, however this Saturday poses an entirely different challenge – a tough trip down to the south coast to face an in form Plymouth Argyle side who sit in sixth position in the Sky Bet League Two, two divisions higher than the Coasters are playing in at present.

This round will be the first that Plymouth Argyle have played in in this season’s FA Cup and they’ll probably go into the game as favourites as they’re unbeaten in all competitions since the end of September, winning five of their last seven games.

They drew 1-1 away at Burton Albion last Saturday but recent wins have come against Tranmere Rovers, Carlisle United and most recently, Cheltenham Town. The danger man to watch out for, who is the top goalscorer at Plymouth, is Reuben Reid who has seven league goals to his name already this season.

Home Park, Plymouth is the venue for this game and it is surely the biggest stadium that AFC Fylde have played in to date which should do nothing but spur The Coasters on to try and get through to the second round proper for the first time ever.

Brad Barnes is unfortunately suspended for the game after his red card at Kings Lynn in the previous round.

We are awaiting results of a scan on Matty Blinkhorn but are hopeful of his involvement. Tom Eckersley is added to the squad on return from a long term injury.

The Coasters are otherwise full strength – and will train tonight at Kellamergh Park in an open training session, so get yourself down to watch if you can!

Ticket Prices are as follows;

Don’t forget to book your places on the FREE supporters bus to the FA Cup away at Plymouth Argyle!  We are urging as many supporters as possible to make the trip on Saturday and cheer on The Coasters.