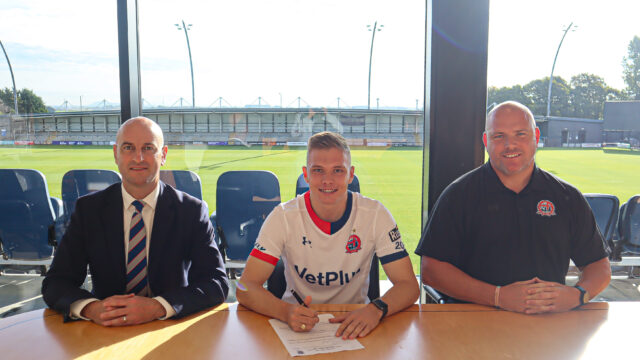 AFC Fylde are pleased to announce the signing of winger Ethan Walker on a short-term loan deal from Preston North End.

The talented 19-year-old has put pen to paper on an initial one-month loan deal from Championship outfit Preston North End and will be eligible for tomorrow’s Emirates FA Cup Second Qualifying Round tie against Spennymoor Town at Mill Farm Stadium.

Walker, an exciting winger, holds the record for being the youngest ever player to represent PNE in a league fixture, after making his senior debut in a home draw against Aston Villa on Saturday 29th December 2018. Since then, the youngster has spent time on loan at Altrincham, Stalybridge Celtic, and most recently, with EFL League Two side Carlisle United.

Born in Preston, Walker has been with the Lilywhites since the age of 8 and will now be looking to gain further experience at senior level with The Coasters.

Speaking to afcfylde.co.uk, Coasters boss Jim Bentley said: “I’m pleased we’ve been able to bring Ethan in to strengthen our attacking options. He is a young player with enormous potential and comes here highly regarded by all at Preston North End.

“Ethan is a talented forward player who had a successful loan spell at Carlisle last season. He’s an exciting wide player, who can go past defenders and create and score goals.

“We are all excited to both welcome him to the football club and begin working with him.”

Walker linked up with his new teammates this morning and will wear the number 20 during his stay.