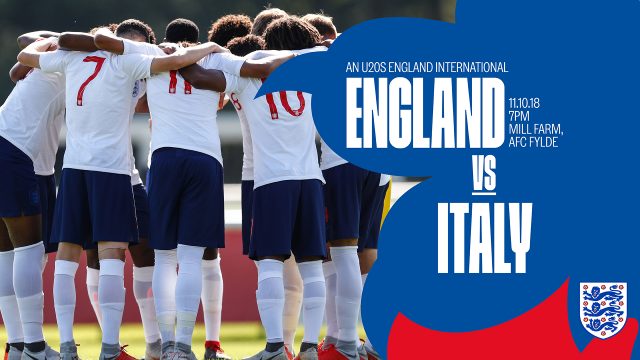 England U20s head coach Paul Simpson has named an 18-man squad for this month’s games with Italy and Czech Republic.

The Young Lions head to the Lancashire coast and AFC Fylde for their first match with the Azzurri on Thursday 11 October, before they travel to Budejovice for their second game of the week against the Czechs on Monday 15 October.

After seeing his team beat Switzerland at St. George’s Park and then suffer a defeat against the Dutch last month, Simpson has added a few new faces to his squad.

QPR forward Eberechi Eze receives his first England call-up at any level after an impressive start to the season at Loftus Road.

And West Bromwich Albion forward Kyle Edwards will be hoping to add an U20 cap to the ones he previously earned at U16 and U17 level three seasons ago.

Simpson said: “We have two really good games coming up. Italy showed what a top side they can be during last summer’s U19 Euros when they finished as runners-up, while Czech Republic will be a tough test too.

“We have a very similar squad to last month and are pleased to welcome Aaron Ramsdale back after injury. We have a couple of new faces in Kyle Edwards and Eberechi Eze, both of who have impressed at their clubs so far this season.

“We’re also really pleased for Reiss Nelson with his call-up to the U21s, as it shows to all the players that the opportunity is there for them across the England pathway.

“We’re in particular looking forward to playing in front of a home crowd at AFC Fylde. We’re really pleased with how ticket sales are going so far and hopefully, it will be a good atmosphere as playing in front of strong home support really helps the players’ development.”

Tickets for the game at Mill Farm are just £3 for adults and £1 for children and can be purchased via tickets.afcfylde.co.uk, by calling 01772 682 593 or in person at the club ticket office.