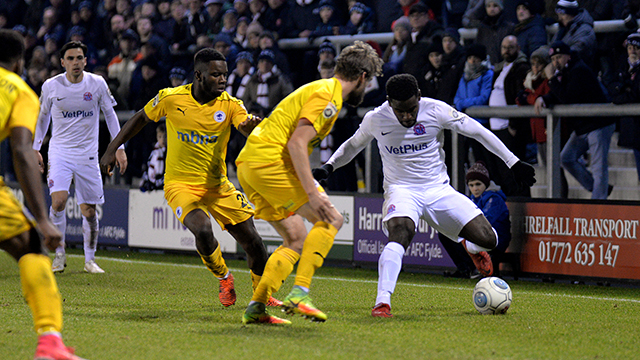 The Coasters led through Danny Rowe’s 14th league goal of the season and looked all set to record a fourth consecutive victory.

However, a defensive mix up 20 minutes from time allowed Chester frontman Harry White to steal in and score to halt Fylde’s winning run.

Recent results have propelled Dave Challinor’s side into the top half of the table and the National League new boys are now with a realistic chance of challenging for a play-off place.

Francis-Angol, who netted his first goal of the season in the New Year’s Day annihilation of Tranmere Rovers, echoed the sentiments of manager Dave Challinor after a frustrating evening.

“Of course we are disappointed,” said Francis-Angol after the match. “It almost feels like a loss because we wanted to continue the great run we were on.

“We had built up some real momentum over the last three games so to drop points in the way that we did was a tough to take.

“It wasn’t that we expected to beat Chester, but it was certainly an opportunity to carry on our form.

“Possession wise I thought we were dominating but we weren’t clinical enough. We can’t just blame one mistake, we just weren’t good enough on the whole.”

Despite the minor ‘blip’, the former Motherwell left-back is enjoying his debut in the fifth tier of English football and believes his side are finding their feet.

“I personally started off the season quite slowly but I’m getting into my stride now,” added the 23-year-old.

“The team is really starting to gel now and overall we are very happy with how the season is going.”

The Coasters face the second of four consecutive January home games at the weekend when relegation-threatened Guiseley come to town and Francis-Angol is confident of a positive result.

“Guiseley are a direct team and it will be a battle. I’m sure we will have to defend well at times.

“However, our game at Bromley last week was a battle too and we came out on top there, so I have absolute confidence in the lads.”