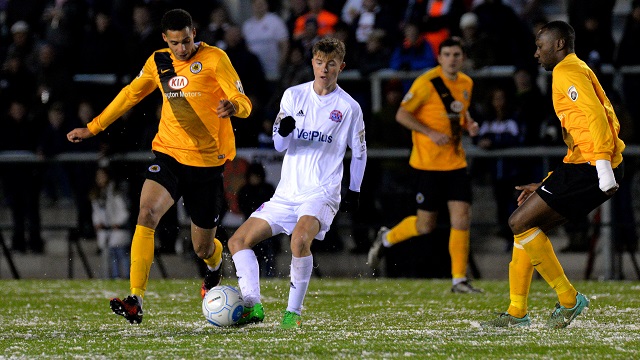 The young midfielder marked his first call up to the England C side with a brace of assists in the Three Lions’ 2-1 victory in Estonia a week ago.

Then just four days later, Hardy turned in a Man of the Match display as the Coasters demolished Boston United 9-2 in the National League North.

Hardy has been a revelation this season and enjoyed his best game yet against the Pilgrims, setting up four goals and scoring one to keep Fylde four points clear of rivals Chorley at the top of the league table.

The former Manchester City man had been challenged by his manager to add more goals to his game, but Hardy admits he is just as happy laying them on for his teammates.

“It has been a very good week for me personally. I really enjoyed going away with England and then to come back and be involved in such a huge win was fantastic.

“I thought we played really well, although the opposition didn’t really test us. We cut them to pieces all afternoon.

“Going one behind early in the game kicked us into gear and then the second half was about being professional and not becoming complacent. We kept our shape and overall it was a very good day.

“I enjoy creating chances and providing assists just as much a scoring. I like to help the team however I can but obviously it was nice to get my name on the scoresheet too.”

Manager Dave Challinor was delighted that his side coped well with the adverse weather conditions on the day and Hardy believes his side had their best spell when the weather turned.

“I thought we actually played some of our best football when the hailstone started. It did become a little bit difficult because the ball slowed down and it became quite slippery, but we dealt with it very well and that bodes well going into the winter months.”

The Coasters take a break from league action this weekend with a trip to Gloucester City in the FA Trophy but Hardy insists the winning mentality will remain the same.

“We will go into this weekend’s game exactly the same even though it’s in the cup. We want to win and progress into the next round.”