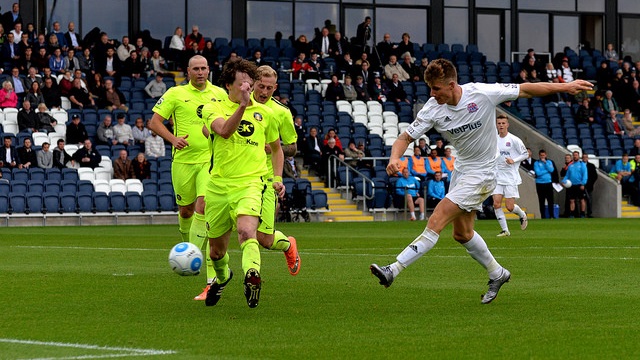 The 25-year-old joined the club last week from Alfreton Town for a record five figure sum and was thrown straight into Dave Challinor’s starting line-up for the visit of Gainsborough Trinity on Saturday.

Bradley marked his debut with a fine goal in the 3-1 victory as the Coasters maintained their place at the top of the National League North table and the winger was pleased to kick-off with a win.

“I was delighted to score. It was a bit of a difficult afternoon for us because they came to try and sit back and nick a result. It made it even more difficult when they got the goal because they became even tougher to break down.

“I think that will happen a lot this year so we’ve got to get used to it but overall I’m delighted to win and delighted to score on my debut.

“I came from a team that perhaps plays in a similar way to Gainsborough so I know that teams will come and do that. The sooner we get used to it as a group, the better. If we can react like that in every game then we’ll have a decent season.

“The more goals that everyone can chip in with the better rather than relying on one person. If we can score goals as team then that will only help us.”

Fylde fought off competition from Lincoln City, Kidderminster Harriers and Halifax Town for Bradley, who now has eight goals for the season, and he was delighted to put pen to paper.

“I was really pleased to get the move done. I heard about it last Saturday and then Monday-Tuesday was sorting out the move and on Wednesday I came down to sign. It was just nice to train on Thursday and Friday back into full-time and then playing today.”

The Coasters take on Stockport County this evening in a rearranged fixture and Bradley is keen to continue the unbeaten start to the season.

“Stockport is a nice place to go and I’m sure there will be a decent crowd. I’ve already played there this year with Alfreton and I think we can definitely go there and get a result. That’s the main thing now, just picking up points.”