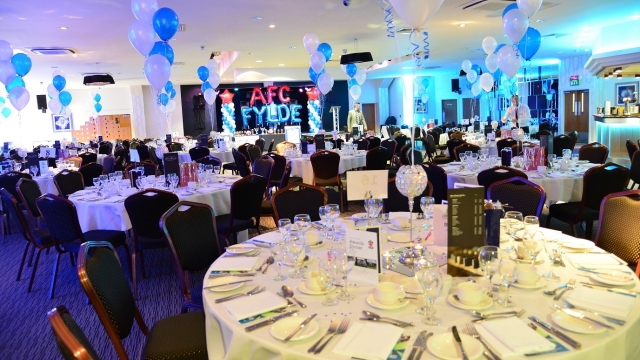 DON’T miss out on AFC Fylde’s End of Season Awards night which takes place at Ribby Hall on Saturday May 16th – next weekend!

The 2014/5 campaign has seen the club finish in their highest position ever, have their best ever run in the FA Trophy and capture the national spotlight in the FA Cup.

The evening will see players, management and club officials get together for an evening of great entertainment, awards and some superb food and drink.

On the night which will  be hosted by the club’s Dave Riche and Brian Porter, there will be a chance to hear the thoughts of the Chairman, Manager and watch highlights and behind the scenes videos of the past season. Attendees will also vote on the night for the goal of the season and have the chance to take part in a quiz, raffle and auction with some great prizes.

Food wise, you can select from the following menu upon booking but a pre order is needed by Monday May 11th – so get picking!

Tickets are on sale now which include a three course meal and live entertainment from Daniel Sings after the awards ceremony.

The clubs First Team, Under 18, Development and Academy players will also be recognised with awards with a sports auction and raffle also being held.