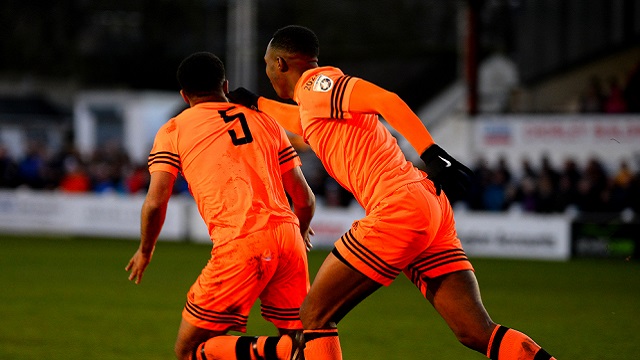 AFC Fylde defender Dom Collins was delighted to make a ‘dream start’ to the New Year.

Collins put in a man of the match performance in the 3-1 victory over promotion rivals Chorley at the weekend as the Coasters maintained their six point lead at the top of the National League North table.

The 25-year-old has struggled for a regular spot in Dave Challinor’s side this season, but was thrust into the team for the trip to Victory Park – just his fifth start of the league campaign.

Collins netted the all-important equaliser for Fylde on their way to victory and admits he wasn’t anticipating making such a dramatic start to the year.

“The day before the game I would have never dreamt of making such a good start to the New Year from a personal point of view.

“I’ve always made sure I’ve kept myself fit when I’ve been out of the team and whenever I’ve come in I think I’ve done well.

“It was important for me to start the New Year well. I’ve obviously not played as many games as I would have liked so hopefully I can get a few more under my belt this season.

“First and foremost it was nice to be back in the side and to get the right result. The manager wanted a reaction from us after Boxing Day and I think he got that.

“We needed to prove to the fans and ourselves that we can compete, especially when you come to difficult places like Chorley.

“They scored a great goal straight after the break and that knocked the stuffing out of us a little, but even when we went a goal down, we were still well in the game.

“It was a massive boost for the lads to respond with an equaliser so quickly. It gave us a much needed confidence boost and then we kicked on from there, dug in deep right until the very end and got our reward.

“I think we were actually more confident of winning the home game than the away one – it’s funny how football works sometimes.

“It’s a massive win for us and now we have FC United at home which is another huge game with another big crowd and we are really looking forward to it.”

Both sides were forced off the field during the game on New Year’s Day in unusual circumstances as Chorley striker Marcus Carver received treatment and Collins admits the break worked in his sides favour.

“I think the break in play probably did us a favour. We had the chance to get back into the changing room, regroup and get some words from the manager.

“It was a scrappy game but it always is against Chorley. They are a very good side and they play route one football, plus they can mix it up. So to come away with three points is magnificent.”