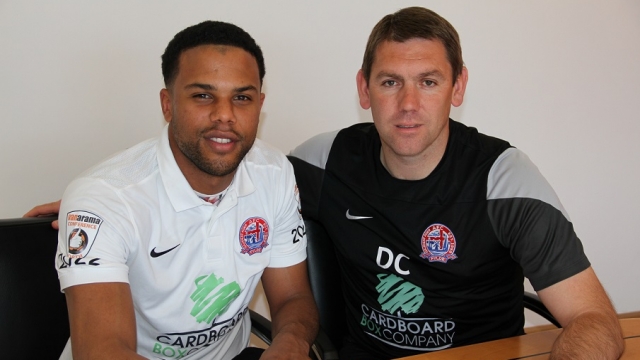 AFC FYLDE have signed Dominic Collins from Southport as the first new recruit for the 2015/16 campaign.

The 24 year-old defender has played in the Conference Premier for the past three seasons and is keen to get back there again with The Coasters.

Manager Dave Challinor has tracked Collins for the past couple of years, and is delighted to have his man on board.

Collins began his career with Preston North End and had spells with Crawley Town, Chester FC and Hereford United before joining Southport.

Challinor said: “I’m delighted to be able to announce our first addition to the squad for the 2015/16 season with the capture of Dom. He is a local lad, lives in Wesham and is a player I’ve been chasing for three years but have finally got him.

“He’s spent the last three years playing in the Conference Premier and at 24, although young has good experience. He’ll give us more presence, is athletic, can defend and can play. His versatility means he’s equally as comfortable at full back as at centre half, which gives us good options. We’re really looking forward to working with Dom and making him a better player.”

Collins has put pen to paper on a two year deal, with a further option and is looking forward to playing for his home town club.

“AFC Fylde are a progressive club that are very much on the up and I’m glad to have signed a deal,” he said.

“I’ve followed the results and the direction the club has been going in for the past few years and now I’m part of that.

“Living locally, I’ve seen the development with the new ground and it will be great to be part of the club as we move there.

“Next season is massive for AFC Fylde and I can’t wait to get going.”

Boss Challinor has a busy close season schedule with a hit list of targets which he is keen to add to the club ranks, providing they are quality additions.

He added: “Dom is the first of three or four potential targets I have. I’d hope to be able to tie up deals for the others in the next few weeks but there are no guarantees at this time of year as good players have more than a few options.

“I won’t bring players in for the sake of it and if we don’t get the ones we want we’ll be patient and look at other things. Dom will report like the rest of the lads in Mid-June as we look forward to an intense but exciting pre-season programme.”

SIGN up for an AFC Fylde season ticket for the 2015/2016 season now and get great savings with our Early Bird offers.

Click here to see our brochure which can be downloaded http://t.co/inkxb9LRaO