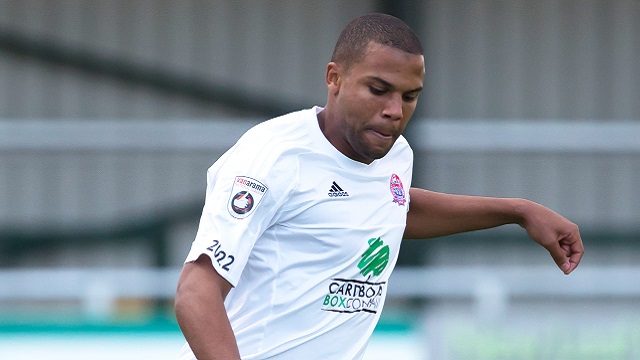 AFC Fylde defender Dom Collins is determined to make an impression with the Coasters after a stop-start first season with the club.

Collins struggled for a regular spot in the team last season due to the form of fellow centre-halves Josh Langley and Tom Hannigan but is keen to make a fresh start this term.

“I want to right a few wrongs of last season,” admitted Collins. “I was a bit disappointed with how I performed on occasions and I probably wasn’t as fit as I could have been.

“Now we are full-time it’s easier to keep up fitness even when you aren’t involved in the team.

“Pre-season has been really good so far. The new lads that have come in look really fit and sharp and they are raring to go.

“Training day-in day-out is going to set us in really good stead for the new season and it has been great start so far. Everyone looks fit and fresh after the break.”

Fylde captain Hannigan departed the club this summer and Collins is relishing the chance to battle it out with the current crop of defenders for a place in manager Dave Challinor’s plans.

“I want to have more involvement this season but at the end of the day that’s up to me. I spoke to the manager and he told me that the team isn’t picked yet so it’s up to us as individuals to stake a claim for a shirt.

“There is always going to be competition and I can also play full-back so that’s another option. The new lad Steve (Williams) has come in and he looks very sharp and we also have Josh (Langley) so it’s going to be tough.

“But at the same time we can all help each other and push each other. I’m sure whoever misses out will keep themselves fit. It will be a good battle between us and I’m really looking forward to it.”

The former Chester defender also believes that the switch to full-time football is a massive positive for the club.

“The transition to full-time is a big decision but it will make a massive difference to the lads that were just training part-time last year.

“I spoke to the manager during the summer and I told him I’d love to give it a go. Personally I have always played my best football when it has been on a full-time basis.

“I was full-time at Hereford in the Conference and that’s where I showed my best form.

“It can only benefit us as a club and as players to be training regularly. We have a lot of younger players and we are all still learning so this will give us a huge advantage. We can work on things that in the past we might not have been able to.

“It was the perfect decision for me personally. I did have to sort out a few things off the field but once I got the go ahead, I told the manager I couldn’t wait to get going.”