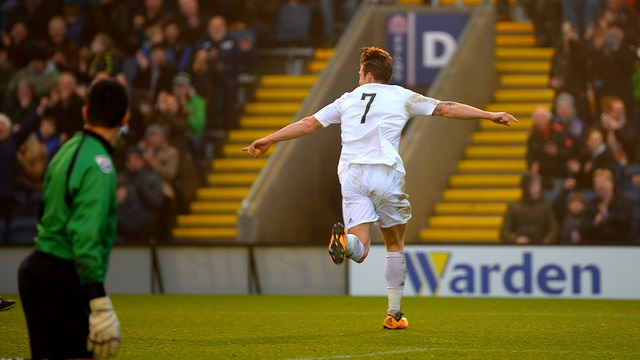 AFC Fylde goal hero Dan Bradley insists there is no time for sentiment after his goal helped the Coasters to a crucial victory over his former employers.

Bradley finally broke the deadlock after being held for over an hour by struggling Alfreton Town on Tuesday evening to restore Fylde’s nine point lead at the top of the Nation League North.

The midfield man became the clubs’ record signing when he joined from Alfreton in September, but had admits he had no problem dealing the killer blow to his old club as Fylde continue their promotion charge.

Bradley said: “Above everything else, I’m delighted to get the three points. It’s a dog eat dog world out there and we need to win the league so it’s just another win ticked off as far as I’m concerned.

“It was massively important to bounce back after the weekend’s defeat at Curzon. Thankfully we’ve managed to do that after every defeat this season and that is very important if you have aspirations of winning the title.

“It has been a huge plus that we have that in our locker. It isn’t going to be an easy ride between now and the end of the season and we could lose another game along the way so it’s important that we know we can bounce back.”

Fylde struggled to get going in the first half and Bradley admits a rousing half-time team talk kick-started their performance.

“Alfreton came here to get a draw or maybe sneak a 1-0 win so they sat back quite a bit. But as soon as the second-half kicked off we were in control. There was plenty said at the break about moving the ball more quickly and being a little sharper and we did that. Thankfully we managed to kill the game off too.”

Second-placed Kidderminster Harriers now have a game in hand on the Coasters, but the 25-year-old insists the pressure is on their title rivals.

“We have played an extra game to some teams, but the pressure is on them now because they have to go and get something from their game in hand. Fingers crossed we will still be leading the pack at the end of the season.

“I think we’d be lying if we said we didn’t look at the table, but we try not to focus on it too much. It’s more important to keep picking up results and we will bother about the table in a couple of months.”