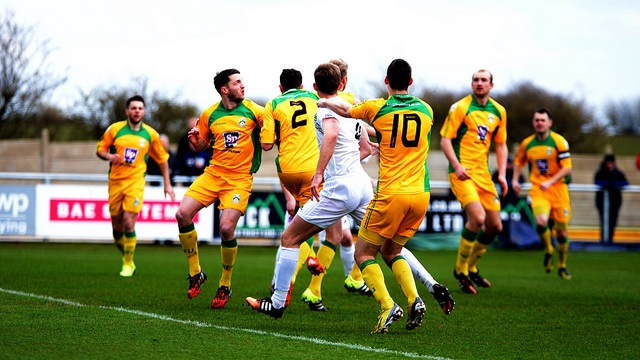 Didn’t get what we deserved

AFC Fylde manager Dave Challinor believes his side were desperately unlucky to come away from Saturday’s match against North Ferriby United empty handed.

The Coasters looked to have secured a point in the last minute, but Matty Hughes was harshly ruled offside.

Challinor said: “It’s never nice to lose on occasions where you don’t get what you deserve in football and that was the case, we’ve certainly not got what we deserved out of that game.

“I suppose it shows the fine lines between winning and losing. We’ve missed the two best chances of the game and within two minutes on both occasions we’ve gone on to concede. It was a poor decision from the officials at the end to disallow Hughesy’s goal, he’s clearly onside and ultimately it’s cost us the game.

“We’ve shown the referee the footage and Hughesy is onside when the keeper saves it. It’s disappointing that we’ve been done on these sort of decisions probably five times in the last 18 months. It’s happened today and it also happened against Solihull with Josh Wilson’s disallowed goal last year and it happened against FC United and Boston aswell. It’s a tough one to swallow but we need to get over it and look ahead to tonight.”

“On the flip side the goals we conceded were poor. We know about Billy’s team, they work hard, they get the ball forward, they get runners coming from midfield and you’ve got to track those runners and stop balls going into the box and we didn’t.”