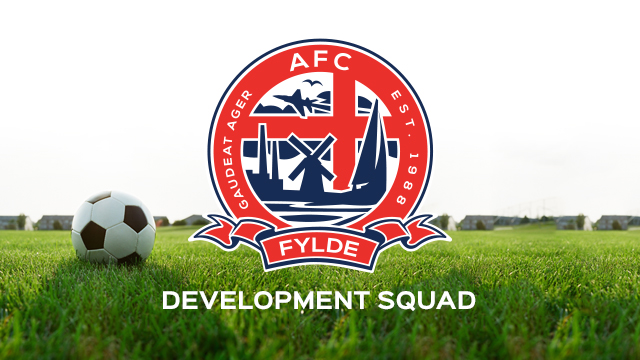 AFC Fylde Development Squad travelled to Abbey Hey FC on Thursday night to face Hyde Utd Reserves and returned with a valuable point for their efforts.

The squad looked to bounce back from their first league defeat in twelve months, which was inflicted by FC United on Saturday, and responded positively.

A goal from Matt Blinkhorn fired the team in to a 1-0 lead at half time but a resilient Hyde side recovered in the second and equaliser to set up a frantic final half an hour.

The side was much changed from recent weeks as Andy Pilkington took the decision to freshen things up and named a young squad for the fixture with many of the successful FA Youth Cup squad given their chance and he was delighted with their performance.

“Thursday was a real test for us.  Hyde matched us and caused us quite a few problems over the ninety minutes and will feel unlucky not to have got more from the game.

“That said we were in a similar boat as we had a lot of possession and created several chances of out own.  In truth the game could have gone either way and was an exiting attacking game of football.

I was delighted with the lad’s commitment.  They ran themselves in to the ground and put themselves on the line at times and that is a good foundation for any side.  Technical ability is only part if the package and I’m a big believer that if a team has heart and commitment they will be successful and we had that.

“We made a tough call when naming the squad and left out many of our more experienced players to give the kids a go, they didn’t disappoint and more than repaid the faith shown in them.”

The Development Squad travel to Lancaster City this coming Thursday (7:45 KO) in their next fixture in the Lancashire League.