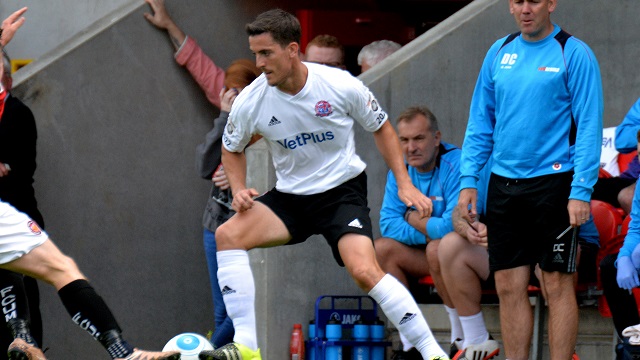 The Coasters crashed out of the FA Cup at the second qualifying round stage following a 1-0 defeat against Alfreton Town on Saturday.

Bond joined Dave Challinor’s promotion chasers over the summer following his release from League Two side Crawley Town and had enjoyed an unbeaten start to his Coasters career prior to the weekend’s result.

However, despite having numerous opportunities to score, Fylde failed to register for the first time this season and Bond was disappointed that their FA Cup adventure was ended prematurely.

“We have been beaten which obviously isn’t good and something we haven’t been used to. It’s the first defeat since I’ve been here which is tough to take but we’ll be back in training on Monday and concentrate on the next game against Gainsborough on Saturday.

“We created a lot of chances – more than enough to win the game – but it just didn’t seem to want to go in. It was just one of those days I think.

“Will being out of the cup help us in the league in the long run … you could look at it that way but we still wanted a decent cup run. It’s nice to get as far as possible but looking on the bright side, it could help with concentrating on the league.”

The 30-year-old has been a mainstay in the Fylde midfield over the opening six weeks of the campaign as the Coasters have recorded seven victories and three draws in the league.

However, the former Colchester United midfielder isn’t resting on his laurels.

“I’ve loved it here since day one,” added Bond. “There’s good competition here and you’ve got to be on your toes every day and in every game. I don’t go into training thinking ‘Oh I’m going to play on Saturday’. We all want to play and we all want to win so nobody’s place is guaranteed.

“You’ve got to put it in during the games and obviously in training to get selected by the gaffer. The team has been quite settled so far and we are doing very well so long may that continue.”