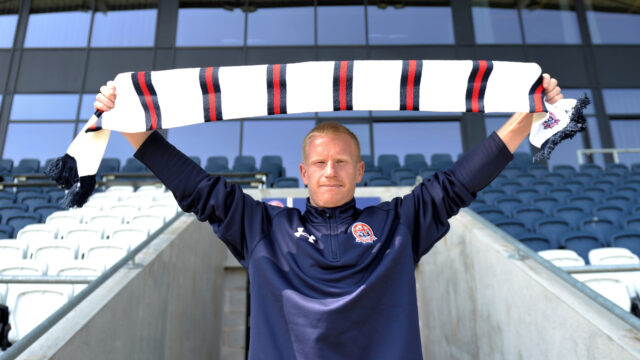 Midfielder with over 700 appearances in his career arrives at Mill Farm.

We are delighted to announce that David Perkins has joined AFC Fylde, following the expiry of his contract with English Football League side, Tranmere Rovers.

Perkins, who has amassed over 700 club appearances in his senior footballing career, made 33 of those for Tranmere during their 2019/20 Sky Bet League One season, whilst also playing a big part in the club’s exciting FA Cup run which saw them beat Premier League side, Watford FC.

Coming through at Morecambe to begin his career, Perkins knows all too well the expectations and the mentality of his manager, Jim Bentley. The now 38-year-old made nearly 200 appearances for the Shrimps, gaining not only knowledge of his new manager, but also of the non-league scene as well.

As an experienced, battling and determined central midfield player, it is clear he will add vital knowledge to the heart of the Coasters’ midfield.

Speaking to afcfylde.co.uk after completing the move, Perkins said: “I have been watching Fylde over the last couple of years, the relegation last season was disappointing but I’ve kept a close eye on the project that they’re building here and now I can’t wait to be a part of it. I’ve had a proper look around the ground and the facilities made it a no brainer, really. I’ve played for a lot of league clubs and they don’t have half the set-up that we do here.

“I now want to help get the club into the league. I started my career with Morecambe so I have a non-league background to call upon which I am quite excited about. I know Jimbo well from Morecambe, I am going to have to get used to calling him the Gaffer now instead! He was a massive factor in me coming here, I also know Burkey [Luke Burke] and Jonty [Castle] both from Wigan as well, so this is a perfect fit for me.”

Jim Bentley was thrilled to secure the services of a player he knows well, in a key area of the pitch.

He said: “Perks is someone I have known for many years and is one of the fittest and best professionals around. He’s been successful in his career and along with Chris [Neal] and Nathan [Pond], they bring great experience, professionalism, a know how of winning games of football and winning promotion.

“Perks is energetic, solid and is a good all round footballer. He’s played the majority of his football in the centre of the park, but he’s adaptable and is the type that can play anywhere, will always give his absolute all and is a consistent performer. I am really pleased Perks is on board and I am sure he will do well for us on and off the park.”