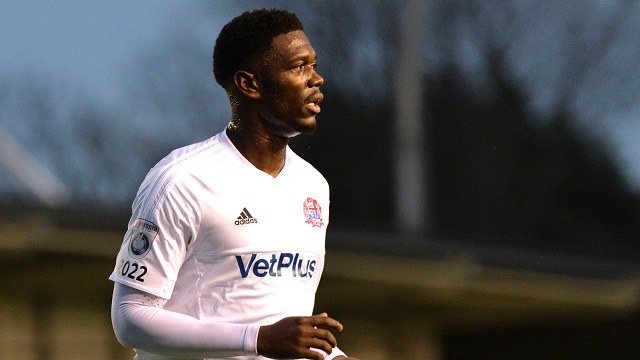 AFC Fylde striker Darren Stephenson is predicting a tight game against his former club Chorley when the sides meet at Mill Farm on Boxing Day.

The encounter will see the league’s best attack go head-to-head against the strongest defence, with Fylde having already scored 66 goals and Chorley only conceding 14.

Stephenson spent four years at Chorley and scored 18 goals last season as the Magpies finished eighth in the National League North before his big move to Tranmere Rovers in the summer.

The pacy frontman is now relishing a match-up against his former employers.

“I anticipate it being quite a tight game but goals change games. We need to start off well and then kick on from there.

“I’ve got good memories of my time at Chorley. I won the league there to get promotion into the Conference North. I had a great couple of seasons and I scored a lot of goals.

“I’m looking forward to playing them a lot. I’ve always wanted to play against Teague (Andy Teague) and see how I got on. This is my chance to show teams what I’m about. It’s been a while since I played against them and it will be a lot of fun for me. I think it means a lot more to play against your former club.”

Stephenson is yet to open his league account for Fylde although he scored his first goal for the club during the Lancashire FA Challenge Trophy tie at Clitheroe in midweek.

“It was great relief to get my first goal. I’ve not scored for a while and I’m trying to get my confidence going so it was a good goal to start off with for the club and hopefully I can keep going and get more goals.”

Monday’s game will see a record attendance at Mill Farm, with over 2,700 tickets having already been sold and Stephenson believes that the atmosphere could play a key role.

“The atmosphere on Monday is going to be very important. We need to try and get the fans going and keep the Chorley fans quiet. If we are able to build and our fans can get behind us, then we can really try and win the game.

“It’s a big chance for us to extend our lead at the top of the league. If we do get those three points, it could be a massive three points in the future.

“Having two games against Chorley in a few days – it’s a massive week. We’re playing a team that is in and around us. If we win twice or win once and draw once, it will be massive for us and it puts Chorley further behind in the process.”