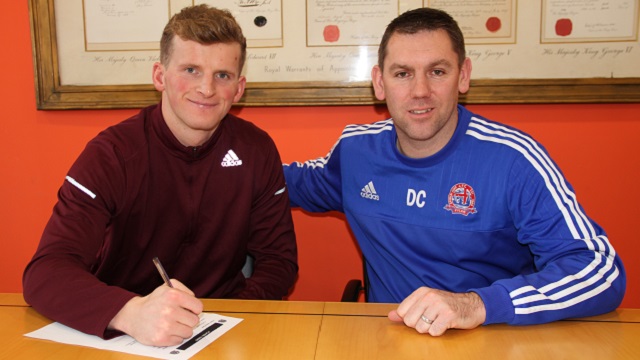 AFC Fylde are delighted to announce that star striker Danny Rowe has signed a new two-and-a-half year deal at the club with the option of a further year which effectively ties the frontman to the club for the next three and a half years.

Rowe has been in sensational form for the Coasters this season and currently leads the scoring charts with 26 goals, including nine in his last seven games.

The 27-year-old joined the club in August 2014 from Lincoln City and fired 31 goals in all competitions as Fylde narrowly missed out on promotion last year after play-off heartbreak.

The in-form striker was thrilled to pledge his future to the club and said: “Fylde are my local team and I’m delighted to get the deal done.

“I’ve been here since the start of last season and I feel very settled now. At first I was a bit in and out of the team, but now I’m doing well and I want to continue that.

“I’m scoring goals which is great, but ultimately my main aim this season is promotion.

“This is a club that is really going places and looking to progress and despite recent speculation I have never wanted to leave, and this new deal confirms that.”

Manager Dave Challinor was also delighted to secure his top scorer’s services: “This is a big statement of intent from the club. We want to keep our best players and Danny certainly comes in to that category. His goalscoring record here speaks for itself and he deserves the reward of a long term contract.

“We are building a strong squad here and the role of central striker is a tough one, but Danny is very good at what he does.

“He can now concentrate on what he does best and continue to kick on because I believe he is coming into his prime. He is capable of playing at a far higher level and hopefully he will be doing that with us in the near future.”

Chairman David Haythornthwaite was equally happy: “Danny Rowe’s scoring record is second to none at this level. Since arriving at Fylde last season he has played 85 games, scoring 57 goals and is improving all the time. There has been a lot of speculation regarding his future recently and we wanted to put this deal to bed so Danny can concentrate 100 per cent on his football.”