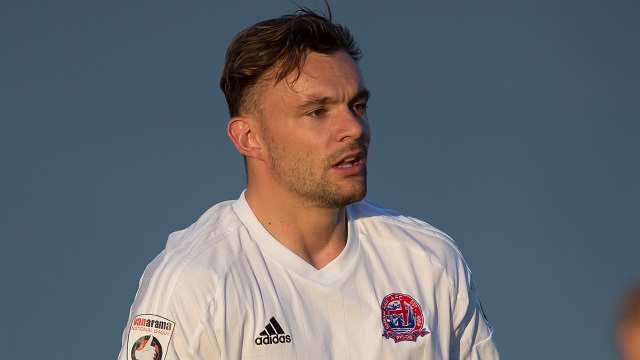 AFC Fylde star Danny Lloyd is relishing his side’s trip to Millwall in the FA Cup and has warned the Lions not to take the Coasters lightly.

Dave Challinor’s side were handed a glamour tie against the League One giants in Monday night’s first round draw and Lloyd believes it is potentially the match of the round.

“It’s a massive draw for us,” said Lloyd. “Personally, I think ours is one of the bigger – if not the biggest – draw of the whole round.

“We know it will be a tough game – they are 10th in League One so they are a very good side.

“But I think if we go down there with a game plan and show what we can do then I’m sure we can give them a game.

“Millwall are a huge club with a big fanbase so we are expecting a really good atmosphere on the day. They only came down from the Championship last year so they won’t want to get beaten by us.

“I’m sure they will have someone come and watch us on Saturday to find out a bit more about us, but I don’t think we have anything to be scared of. We will just go and play our way and with a bit of freedom. No one outside the club will be expecting us to get anything, so let’s go and prove people wrong.

“We all believe we are good enough to play at a higher level so we have to apply ourselves to the best of our ability and see where that takes us.”

Lloyd, who has two FA Cup goals to his name this season, admits he would have taken whoever came out of the hat, but he is now focussed on causing an upset.

“I really didn’t mind who we got in the draw. It would have been nice to get a lower ranked team with a better chance of getting into the second round, but this way it would be all the more special if we did progress after drawing a club like Millwall.

“We want people to stand up and take note of who AFC Fylde are and put ourselves on the map.

“I came off the bench against Plymouth last year, which was a fantastic experience and it was a game that we all look back on thinking we could have got something from it. We had chances and did ourselves proud.

“Millwall will be a completely different kettle of fish. They are pushing for promotion this season and it’s just a case of us trying to hold our own.

“I don’t think playing at a stadium like that will intimidate us. On the contrary, we are relishing the occasion and the chance to play in front of a big crowd. It’s something we don’t have the opportunity to do very often and I think it will spur us on.

“We want to enjoy the occasion, but also make an impact and there’s no reason we can’t do both. No matter what happens we are going to enjoy it, but what a story it would be if we went there and got something, even if it was a replay. Bringing a club like Millwall back to Kellamergh Park would be some night.”