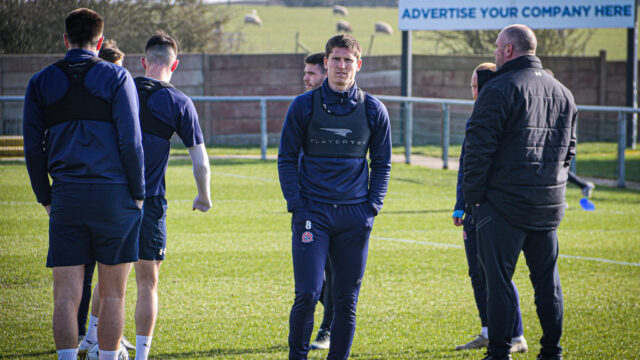 Danny Philliskirk: “We’ve really come together this season; we are like a little family.”

There are only five players from last year’s National League campaign that remain with The Coasters, and playmaker, Danny Philliskirk, is one of them.

“It’s difficult because we just want to play football. That’s what we are all here for. It’s through no fault of our own that we can’t do what we love and that’s what has been so frustrating. But you can’t sulk, you can’t moan – it’s just something you have to get on with. Mentally this period will probably make us all stronger in the future. “

We speak via telephone after a physically-demanding training session, something that has become the norm in recent weeks. Led by Jim Bentley, Nick Chadwick and Andy Taylor, The Coasters have been maintaining their fitness levels through training sessions and behind-closed-door friendlies, and the 29-year-old believes the team are in good shape to continue if allowed to do so:

“We’ve carried on training in the hope that we will be able to continue at some point. We look good physically, everyone is in really good spirits and we’ve had a couple of friendlies to keep us ticking over.

“To be honest, I think we’ve really come together this season; we are like a little family. With the restrictions around lockdown, our lives at the moment revolve around coming into work, training and then going home. We are all really grateful for that – being able to come in and train with our mates. Not everyone has that privilege, so we are lucky. Hopefully, all our efforts recently will be worthwhile and we hear back from the league soon.

“We’re just glad that we aren’t sitting at home, and we have the chance to come into work every day. It’s actually given us some time to work on things over the last four weeks that, in an ordinary world, we wouldn’t have been able to. I’m sure other teams won’t be working on what we are at the moment, so that’s a big plus for us.

“I do think we are all at the point now where the staff and players want to know what’s happening because we want to know if all the hard work that we’re putting in is going to be rewarded.”

Behind Luke Burke, ‘Philly’ is the second longest-serving player on AFC Fylde’s books, and it is only now, after addressing an injury, that he feels he is finding his stride:

“In the previous two years I’ve played through a double hernia and I wasn’t my full self, especially in terms of getting around the pitch and even getting on the ball. That’s not an excuse, but it certainly does take it out of you.

“You can’t sprint around as you usually do and your general mobility is affected. Training on a Monday morning would kill me; I’d have to have a couple of days off after a game.

“This year I’ve felt loads better in terms of my pressing etc. I’m able to get around the pitch so much easier which has been a big help.

“Before the season was stopped, I probably got back to where I was four or five years ago. Things started well, I just don’t want it to stop now. We are all desperate to kick on and get back to where we feel we belong.”