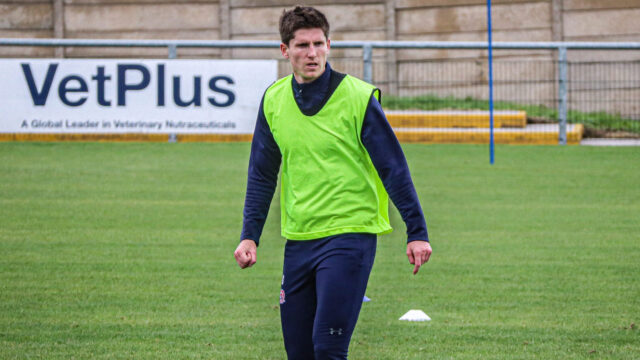 The Coasters return home this weekend for the visit of Gloucester City, and Jim Bentley’s side come into the game unbeaten and going strong in the league.

That was helped last weekend by Ethan Walker’s late goal that rescued a point, and ahead of Saturday, we caught up with Danny Philliskirk, who is looking forward to returning to Mill Farm.

“It’s good to be back home this weekend against Gloucester,” Philliskirk said.

“We’ve had some good results, and Saturday was obviously a difficult game, but it turned out to be a good result in the end, so we’re now looking forward to getting back home.”

Last week’s late point showed the character that the Coasters have, and Philliskirk believes his side have a little bit of everything this year, something that will stand them in good stead for this weekend and the remainder of the season.

“We’ve got a little bit of everything this year. I think we’re a good passing team, but I also think we’re good physically, we’re good at battling, and when we need it and the chips are down, we can rely on people to get us out of trouble.”

Gloucester make the trip to the Fylde Coast sitting just outside the relegation zone, but a change in manager sparked a small response last weekend when they earned a draw against Bradford Park Avenue, but Philliskirk knows that Saturday will be a tough fixture despite the visitors’ league position.

“Any game is tough, and although they’ve had a few indifferent results, it doesn’t mean they’re a bad team.

“Last year they were up there, and they’ve still got individuals in that team that played last year, so it will be a tough game for sure, but if we go into the game fully focused and believe in what we’re doing, then hopefully we will cause them problems.”