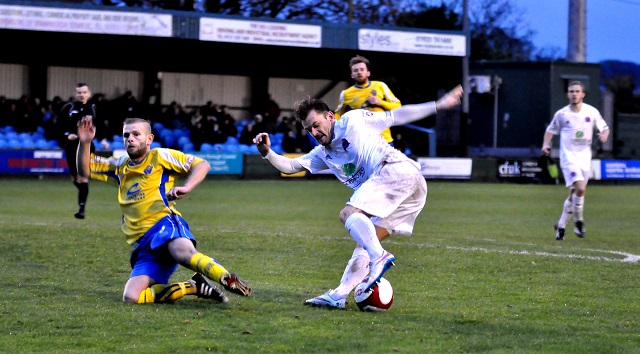 Danny keen to fight for place

The tricky winger filled in at left-back for the 2-0 victory over Warrington Town in the FA Trophy at the weekend and managed to get himself on the scoresheet in the process.

Lloyd, who netted an impressive 20 goals from midfield last season, has been used predominantly as a substitute recently, but hopes his goalscoring return to the starting line-up will give his manager something to think about.

“Of course I want to be starting,” said Lloyd. “But all I can do is take my chance when it comes along and do my best. Team selection isn’t up to me and I will always support the team that the manager selects.

“It’s a team game and we have to support each other if we are going to win this league.

“We know that every squad player is important and will be involved, because it’s a long season, sometimes you just have to wait for your chance, but I think I did well at the weekend and hopefully showed what I can do.”

Lloyd was delighted with how his side played in the victory at Cantilever Park and even got his wish in the first round draw.

“I think collectively we worked really hard. It was a patched up team with people playing out of position, including myself, but we all battled really well in difficult conditions.

“It was always going to be a tough game and the weather and the pitch didn’t make it any easier, but we ground out what was a very good result and scored two goals of real quality.

“I personally wanted a home tie against a local team and that’s what we have. We have had so many away games recently, with a couple more coming up, we just wanted to be back at Kellamergh Park.”

With nine first team players missing on Saturday, Lloyd was one of a number to play out of position, however he admits it’s a position he isn’t unfamiliar with.

“I played for Liverpool schoolboys in Blackburn when I was younger and I actually started out as a full-back before I gradually got pushed up the pitch as I got older. I have no problem playing left-back if the manager needs me to do that, particularly with the number of injuries at the moment, everyone needs to pitch in.”