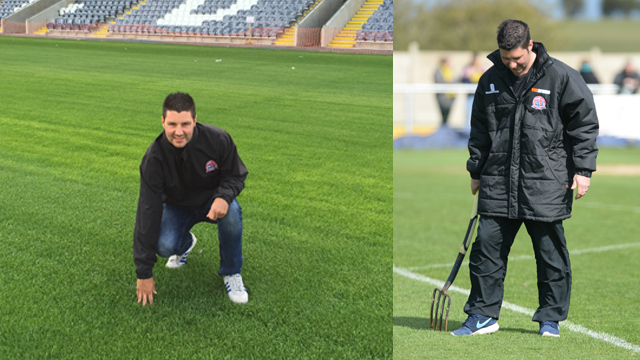 Dan up for top award!

AFC Fylde’s Dan Bunce has been nominated as a finalist for Groundsman of the Year – for the third year running!

Kellamergh Park has long boasted a fantastic playing surface and that has been in no small part down to the hard work put in by our groundstaff.

The award ceremony will take place at St. George’s Park on August 16th and Dan is hoping it is third time lucky!

“The first time I was nominated was when we were in the Evo-Stik and I came in third place.

“Last season I was up against much bigger opposition as all three National League divisions were grouped together, but I still got highly commended, which was a great honour. The overall winner was Bristol Rovers so shows the size of the clubs I was up against.

“This season I was shocked to get another nomination as it was such a tough winter and we had a few games called off due to waterlogged pitches.”

Along with the other nominees, Dan will travel down to St. George’s Park where they will be given a full tour of the facilities and a presentation on the latest equipment, before enjoying lunch followed by the awards ceremony.

We wish Dan all the best and hopefully he can bring home a well deserved award!