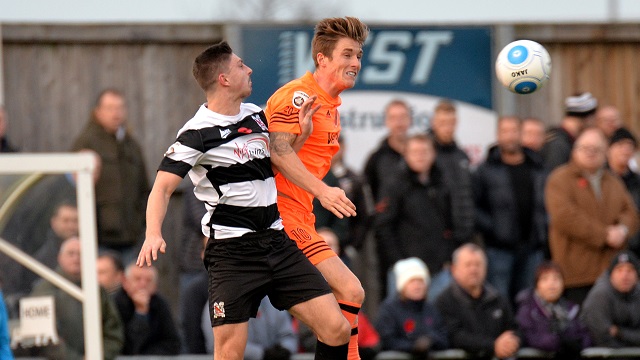 AFC Fylde record signing Dan Bradley believes the hard-fought point earned against Darlington at the weekend could prove to be crucial.

The Coasters maintained their four-point lead over the highly-fancied North East outfit after a 1-1 draw at Heritage Park despite coming under intense pressure in the second half.

Bradley admits his side struggled to get going against Darlington’s style of football but insists the point could turn out to be a big one.

“Obviously, Darlington is going to be a tough place for a most teams to visit this year. We were under the cosh a lot in the second half but I have to give massive credit to all of the lads. We dug in and whether we deserved it or not, we got a point against one of our biggest rivals and that could be massive come the end of the season.

“I think that we’re a little bit disappointed that we didn’t play our own game. I think we got dragged a little bit into the way that Darlington played and we couldn’t get our usual rhythm going.

“They played long balls into the box and were competing for second balls and things like that but, on the other hand, we dug in and managed to hold on for a point in the end.

“Being four points clear gives us a bit of breathing space. Like I say, it is a tough place to come and it’s a good point. Who knows at the end of the season how big a point that it could turn out to be.”