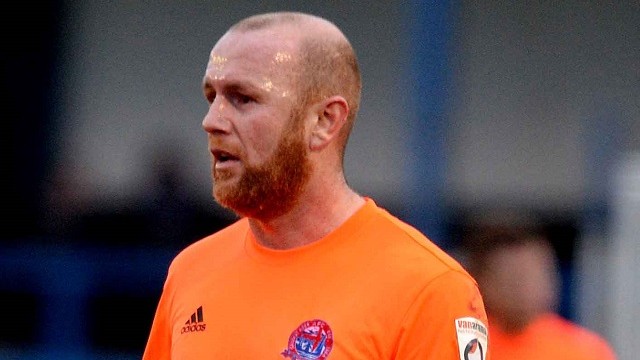 Former Premier League ace Stephen Crainey admits he had no hesitation stepping up in a defensive reshuffle against Gateshead at the weekend, despite spending 15 years playing in his preferred position of left-back at the top of the game.

First choice centre-half Josh Langley missed AFC Fylde’s trip to the International Stadium through suspension following his red card against Worcester City last month and Crainey was shifted in to the middle to partner Tom Hannigan.

Despite ultimately suffering cup heartbreak as the Coasters were knocked out of the FA Trophy by the National League side on Saturday, the 34-year-old insists he was only too happy to fill in.

“I have played on the left of a back three before but not very often,” said Crainey. “I’ve never really played as a two, but I actually quite enjoyed it. Their two strikers were very physical and it was a battle, but you get that a lot in these leagues.

“I felt like I did quite well and we coped with their attack for much of the game, just a lapse in concentration cost us towards the end.

“You just have to stand up and be counted and get on with it. I’m happy to help out wherever the manager needs me and in whatever position.”

Defeat on Tyneside cost the Coasters a place in the quarter-finals of the competition and Crainey was disappointed not to progress with the promise of a Wembley final on the horizon.

“I didn’t think there was much in the game to be perfectly honest,” added the ex-Blackpool man. “I just don’t think we really got going in the second half. The first half was pretty even, but they had more of the ball after the break and put us under a bit of pressure without really having many clear cut chances.

“In the end it was a silly goal to concede and it’s very disappointing to be out of the competition.

“There wasn’t much between us, maybe just their fitness showed toward the end because they are full time.”

Coasters boss Dave Challinor admitted that the cup exit may be a blessing in disguise so his side can focus solely on the league campaign, but Crainey believes there is still a long way to go before they can start to think about promotion.

“We have a lot of hard work to do before we can even think about joining the likes of Gateshead in the league above us. There are still a lot of games coming up and we know it’s going to be very tough because there are a few teams thinking and aiming for the same thing.

“We certainly have the quality in the dressing room to go on a run of games without losing but we need to prove that now and see where it takes us.

“We can focus on the league schedule now and we need to be picking up as many points as possible over the next few months if we are to achieve our goal.”