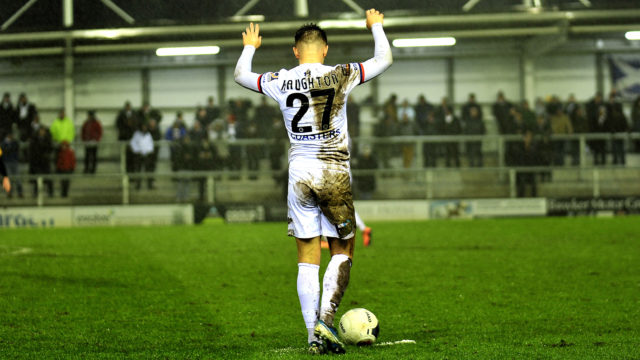 We are delighted to announce that Nick Haughton’s contract at AFC Fylde has been extended, by a further year.

The club has decided to take up its option on Haughton’s contract and has therefore triggered a clause to keep the 25-year-old at Mill Farm until the end of the 2020/21 season.

Haughton joined the Coasters in October 2018, from Salford City. He has since made over 60 appearances for the club and has been a regular throughout the 2019/20 campaign.

After extending the contract of a player he regards as a key member of the squad for the future, AFC Fylde Manager, Jim Bentley said: “Nick is a very talented player that has shown in the time I have been at the club that he could potentially develop into one of the best players in the league, to help us get to where we want to be.

“He’s an exciting player but he needs to work hard at his game and give it his absolute all, and if he does that and fulfils his potential, we will have a very good player on our hands with his best years ahead of him, as an AFC Fylde player.”

Speaking with afcfylde.co.uk after his contract was extended for a further year, Nick Haughton told us: “I am really happy about the club having faith in me, to extend my contract for another year. We are facing difficult times at the moment and none of us really know what’s going to happen, but I am really pleased to have my future sorted at AFC Fylde.

“We didn’t have the season we wanted and we weren’t happy with it, it wasn’t what the fans expected, but the season has ended now and there’s nothing we can do. We will learn from this and crack on when we’re allowed to begin a pre-season, then aim to get where we want to be.”