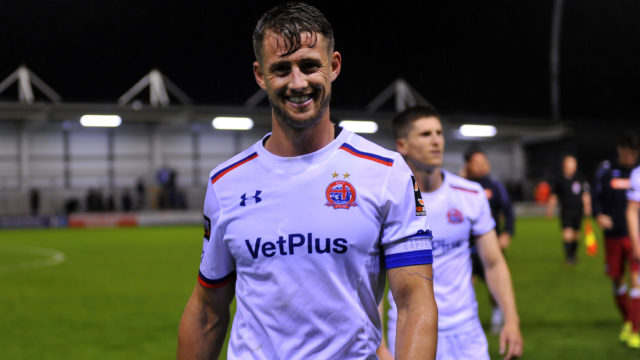 We are delighted to announce that Neill Byrne’s contract at AFC Fylde has been extended, by a further year.

The club has decided to take up its option on Byrne’s contract and has therefore triggered a clause to keep the 27-year-old at Mill Farm until the end of the 2020/21 season.

After joining the Coasters in the summer of 2018, Byrne cemented his place within the starting XI most weeks and has now made just short of 100 appearances for the club.

A towering and commanding central defender, who has often worn the armband at Mill Farm, Byrne will now be remaining on the Fylde Coast for at least another season.

After securing another pivotal member of his side for another year, Manager Jim Bentley said: “Neill is a very good character who has been an ever present since I came to the club. He ticks a lot of boxes you would want from a modern day centre half, and is also a threat from attacking set plays.

“He’s a fully committed player who is well respected throughout the club and just like I said about Nick, if he continues to work hard and gives his absolute all, he can still improve further and his years still lay ahead of him. He’s very determined and focused and will hopefully help us all achieve our goals with AFC Fylde.”

Speaking to afcfylde.co.uk after his deal was extended, Neill Byrne told us: “I’m really happy to stay, it’s a hard time for everyone in this current situation so I am pleased this has been sorted. I’ve been at club two years now, the second has not gone as planned but the first was great. I’m happy to stay and go in right direction with a good group of lads. We never got going this year, but we can put this right and put a good run together next season.

“I think I’ve got some experience already at 27 and I can continue to learn off the Gaffer to improve. He was a hard centre-half, I can learn off him in that sense and combine that with my game of playing with the ball a bit.”