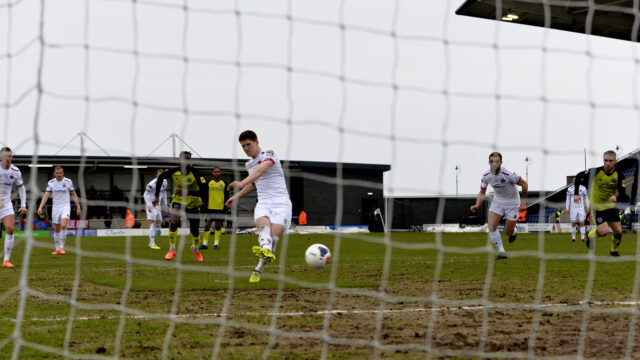 We are delighted to announce that Danny Philliskirk has signed a new two-year contract at AFC Fylde!

An ever-present since his arrival in 2018, Philliskirk has made just short of 80 appearances for the Coasters. A combative, classy and experienced midfielder, the 29-year-old has now committed his future to the Fylde Coast for the next two years and will remain a key part of Jim Bentley’s plans going forward.

Despite not knowing what division the side will play in next season, Danny was so keen to remain at Mill Farm he turned down offers elsewhere, including from the EFL.

Speaking to afcfylde.co.uk, Philliskirk said: “I am delighted to stay here. I was in a position where I had a couple of options, one of those was with a league club, so I was fortunate to have that. I have enjoyed my time at Fylde over the last two years, so I wanted to be here.

“Little things are important to me, such as being close to home and my family, I also coach in the local area and I enjoy that, and I like the club and the set up here. There’s a good positive feeling around the place despite the position we are in. I like the gaffer’s plans and intentions, we’ve had a good chat and I want to be part of that.

“We obviously don’t know what league we will be in but if it is worst case scenario, we will all be looking to bounce straight back with the squad we have here.”

Manager Jim Bentley was just as pleased to see a key part of his squad agreeing to remain with the club. He said: “Philly has been great since I’ve been at the club. He’s a likeable lad, a top professional who comes from good stock and is a top player at this level. He has been a pleasure to work with and although he’s been in need of a hernia operation for a good few months he has turned in some top performances.

“He showed great desire to play through the pain barrier to try and help us get results, but once he is sorted I am sure he will kick on and be an even better player for next season. I am really pleased he’s staying with us.”