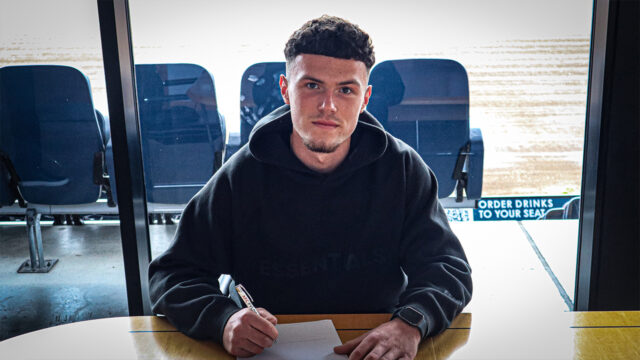 Connor Barrett Is A Coaster

AFC Fylde is delighted to announce the signing of Connor Barrett following the expiration of his contract at Kettering Town.

Connor becomes the Coasters’ first acquisition of the summer and signs a two-year deal at Mill Farm.

A right-back by trade with pace and power, he began his career at Leicester City, where he spent two years with their academy before leaving for a new opportunity with Burnley U23s.

Connor left the Clarets after one season, which enabled Kettering to capture the defender, later seeing him win the Vice President’s Player of the Year awared and flourishing in his National League North debut season.

The right-back now joins up with the Coasters after impressing for the Poppies and will be looking to kick on once again to help Fylde gain promotion back to the National League.

On Connor’s arrival at Mill Farm, manager James Rowe expressed: “Connor is a player we have tracked for some time, and we’re delighted to be able to get it over the line early and make a start to our preparations for the upcoming season.

“He is someone who has massive potential, and it’s now about fulfilling that potential within a full-time environment.”

After signing on the dotted line, Connor was delighted to commit his future to AFC Fylde and said: “I’m buzzing to get the deal over the line and get back into full-time football.

“The facilities here are top tier, and the Club is set up to go far and move up the pyramid quickly – I can’t wait to get going.”