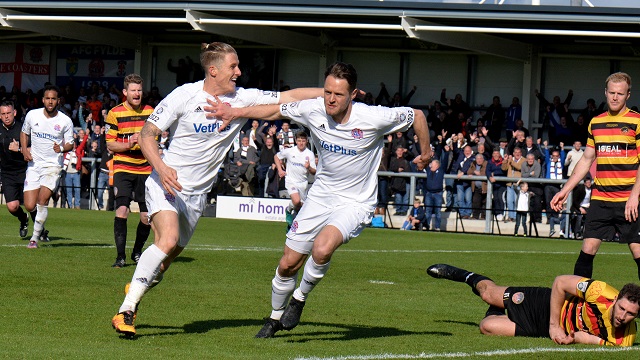 “All comes down to one game”

AFC Fylde super sub Matt Blinkhorn believes the season has come down to one game as the Coasters look to secure the National League North title.

Victory at Boston United on Saturday would see Dave Challinor’s side crowned as champions and Blinkhorn is desperate to get promotion wrapped up.

Blinkhorn said: “The whole season has come down to one game now. We have been waiting for this opportunity all season and hopefully we can see it through.

“We have to go to Boston and put on a performance and make sure that we don’t slip up again. We are more than capable of achieving it.

“From a personal point of view (the goal) felt really good, but it was frustrating because we still haven’t wrapped up the league.

“It has got us a point closer to where we want to be but now we have to go to Boston at the weekend and get a result.

“There was a sense of disappointment and frustration in the dressing room afterwards because we let our chance slip.

“We have to wait a little longer now and we are dragging it out for longer than we would have liked but hopefully next week we will finally be able to celebrate.”

Fylde’s never-say-die attitude has seen them come from behind on 13 occasions this season – including winning four points after the 97th minute – but Blinkhorn insists his side cannot keep relying on such statistics.

“We didn’t perform at all in the first half. We improved after the break and if we had played like that all game I think we would have been comfortable winners.

“Chall gave them a rocket at half-time and I think that showed. We can’t keep doing that though, we need to be able to put teams to bed early. We have the players to do that but for some reason we haven’t been doing it.

It’s a mental thing on our part and we need to start games better and get them won early on.

“For the last 15-20 minutes of the game, Bradford sat back so we knew when nine minutes went up that we would have a chance.

“We put balls into the box and you just hope something falls for you and thankfully that happened and I managed to get on the end of it.”