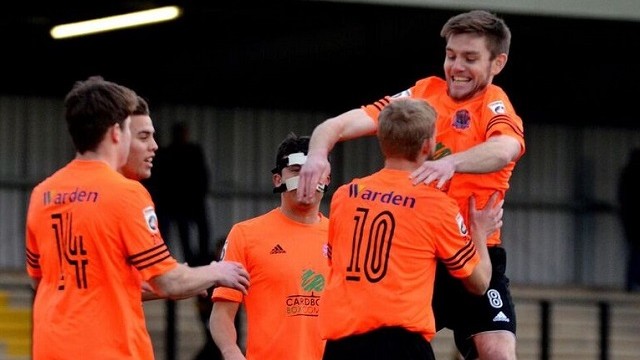 Colin pleased with away win

Assistant manager Colin Woodthorpe was delighted with the 1-0 victory over Hednesford Town on Saturday.

Matty Hughes netted the only goal of the game to move the Coasters within four points of top spot and Woodthorpe was particularly pleased with the performance of new man Stephen Crainey.

Woodthorpe said: “Stephen’s name came up a few weeks ago so the manager got in touch with him and we are delighted to have him at the club. With so many injuries at the moment, we wanted to bring in someone of real quality.

“His experience will be vital and he marshalled the defence brilliantly. We have two young centre halves and he really helped them.

“It’s victories like this that give you the platform for success. We have been a bit critical when not hanging on to these results in the past.

“This was the best result we have got at Hednesford during my time at the club so it was very pleasing.

“It was a difficult game, particularly in the second half when the wind was against us. We really needed to get back to winning ways in the league and to come away with three points was vital.

“Danny Lloyd added himself to the injury list, which was unfortunate for him because he had just managed to get himself back into the team.

“We had a couple of players back, but it was unfortunate to lose another in Danny.”