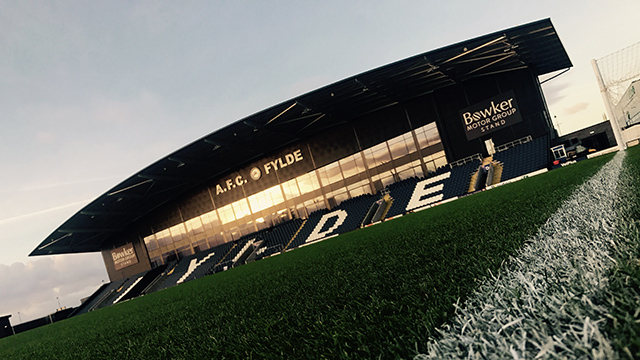 AFC Fylde are coasting towards success, says Glenn Moore in his latest National League column for the Football Writers Association…

Eleven years ago Kirkham & Wesham FC, having dominated the West Lancashire League, moved up to the North West Counties League. They marked their arrival at step six in the non-League pyramid by producing a 15-year plan aimed at reaching the Football League in 2022. Few observers took the proposal seriously.

There were around 900 teams standing in their way at the time. Now there are eight. No one is laughing at them these days. Having ensured the name Kirkham & Wesham would be inscribed for ever by winning the FA Vase at their first attempt, at Wembley in 2008, the club changed name to AFC Fylde, reflecting the area rather than two of its small towns.

The Coasters are now ninth in the Vanarama National League, having been promoted last season, bang on the schedule laid out a decade ago. After a slow start they sit on the brink of the play-offs and defeated leaders Macclesfield and favourites Tranmere, 6-0 and 5-2 respectively, in recent weeks.

As usual in these tales there is a wealthy backer, David Haythornthwaite, who made his money in animal feed. As the name of his company, The Tangerine Group, suggests, Haythornthwaite is a Blackpool fan. However, having been rebuffed by the infamous Oyston family he decided to put his cash to good use elsewhere.

Haythornthwaite has bankrolled Fylde through the North-West Counties League and Northern Premier League to the Vanarama National League – five promotions. This is not, though, a story of big wages being paid out to former Premier League players, as sometimes happens.

The current squad includes plenty who began at clubs such as Manchester City and United, Everton and Chelsea, but none who those clubs’ fans will recall. Lewis Montrose, who won promotion to League One with both Gillingham and Wycombe is the most decorated though the prolific Danny Rowe garners the attention. Rowe, now 28, was a schoolboy prodigy, on Manchester United’s books, but lost his love for the game and became an apprentice joiner at 16. It has been a long haul back.

There is not much celebrity to the manager either, though Dave Challinor was briefly famous for the long-throws that helped propel Tranmere Rovers to the Football League Cup final. Starting at Colwyn Bay he has won four promotions in seven seasons as a manager, finding time to collect a degree in physiotherapy along the way.

The sense of upward mobility is mirrored off the pitch. Kirkham & Wesham had moved into a new ground in 2006 but such has been the speed of the Coasters’ progress that it was soon rendered inadequate. In 2016 Haythornthwaite opened the £18m Mill Farm Sports Village featuring an array of businesses and sports facilities. The centrepiece is a 6,000-capacity stadium.

Doubtless helped by disillusionment with affairs at Blackpool, the area’s traditional powerhouse, but by also Fylde’s vibrant community programme, attendances average around 1,700 having hugely multiplied during their rise.

There are echoes in Fylde’s rise of Fleetwood, 15 miles away. The Cod Army made the play-offs for promotion to the Championship last season. Fylde see no reason why they cannot do the same.