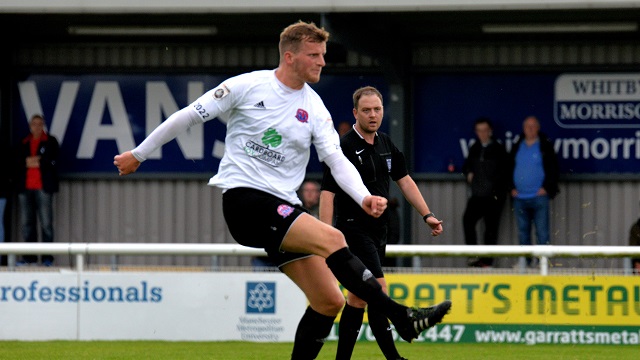 Coasters will be a force – Rowe

Star striker Danny Rowe believes the core of AFC Fylde’s new look squad is starting to take shape and hopes the addition of a couple more established players will make the Coasters a force to be reckoned with next season.

Fylde came from three goals down against Nantwich Town at the weekend to earn a share of the spoils in the third outing of pre-season and Rowe was impressed with the second-half showing and now hopes for more of the same as Dave Challinor’s side prepare for the new campaign.

“We were disappointed to find ourselves three-nil down,” said Rowe. “But in fairness we had a lot of trialists playing and people in unfamiliar positions. It was quite difficult for us in the first half but we put on a few familiar faces after the break and I think it showed.

“We have always been a good footballing team and entertaining to watch. We like to play out from the back with a purpose and Nantwich were very similar to ourselves. However, when the core of our team came on in the second half the difference in class was evident.

“We were a little bit off the pace last year and this season were want to step it up and go one better and win the league. With the players we have brought in and the players that we are looking at we don’t want to be in the play-offs, we want to be champions.

One player that the frontman singled out was goalscorer Sam Finley, who was outstanding during a second-half cameo at the Weaver Stadium.

“Sam is a very good player,” added Rowe. “I’d go as far as to say that he is the best midfielder in our league and he showed that on Saturday when he came on. He has great vision, he’s aggressive and he took control of the game. If he can find that form consistently next year then he will be a fantastic asset to our side.”

Along with Finley, hitman Rowe was one of six substitutes brought into the fold on the hour mark with the Coasters trailing the match by three goals and led the charge with a typical thunderbolt of a goal just moments after entering the fray.

“A lot of the goals I score are from distance to be fair – I don’t score many tap ins. Obviously my position is down the middle but I also enjoy playing in different areas of the pitch. I like playing on the left too and that gave me a chance to cut inside on to my right foot and score.

“It was good to get off the mark in pre-season and hopefully I can grab a couple more before the season kicks off.”