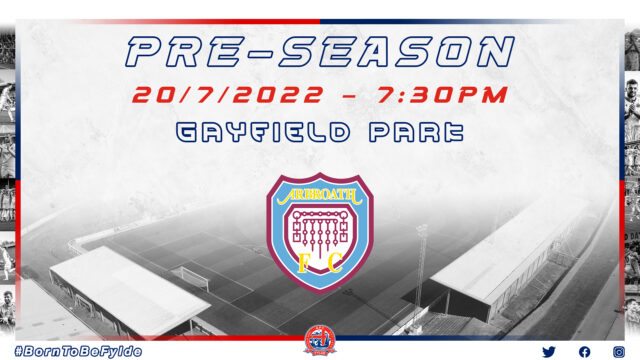 The Coasters have added another fixture to their pre-season schedule, with James Rowe’s men set to take on Scottish Championship side Arbroath FC.

In a week where James Rowe will take his side to St Andrews in Scotland for a training camp, Fylde will travel to Gayfield Park on Wednesday 20th July for a 7:30pm kick-off against the Red Lichties.

Arbroath enjoyed a fairly successful season in the Scottish Championship, finishing second and two points behind Kilmarnock – however, they fell just short in their Play-Off Semi-Final tie against Inverness Caledonian Thistle.

Currently managed by Dick Campbell, who won the Scottish Championship’s Manager of the Season award, the Club holds the world record for the biggest victory in World senior football, which was set on September 12, 1885, after a 36-0 win over Bon Accord in the Scottish Cup.

The fixture could also potentially see former Fylde man James Craigen face the Coasters for the first time since departing Mill Farm in 2020.