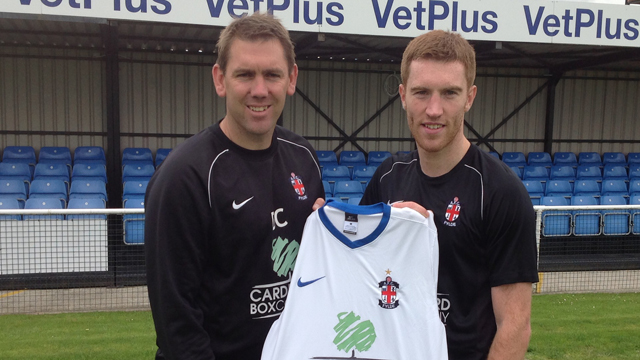 AFC Fylde are pleased to announce their second signing of the summer in central defender Tom Hannigan.

Tom joins The Coasters from former Conference North side Vauxhall Motors and is another player who has been on Dave Challinor’s radar for some time.

“I’m delighted to have finally been able to get Tom in” said Challinor.  “He’s someone I spoke to last summer and had hoped to get him in but he naturally wanted to play as high as he could and chose to stay with Vauxhall and complete another season in the Conference North.”

Despite having better financial offers from other clubs, some of whom also in the Conference North, Tom chose to join The Coasters following the unfortunate demise of Vauxhall Motors.

Challinor added: “He recognises what we’re about in terms of how we play and he will fit into our style having played for a few years at a side that do play from the back.

“Defensively he’s very good and he will hopefully continue to get his fair share of goals at the other and he attacks the ball well and will be a threat at set pieces.

“I have no doubt we can improve him and make him a better player and he’ll enjoy his time here.  I’m really looking forward to seeing him in a white shirt and being part of a fresh challenge for everyone.”

Tom will be looking to make his first appearance for The Coasters in this weekend’s trip to Kendal Town.