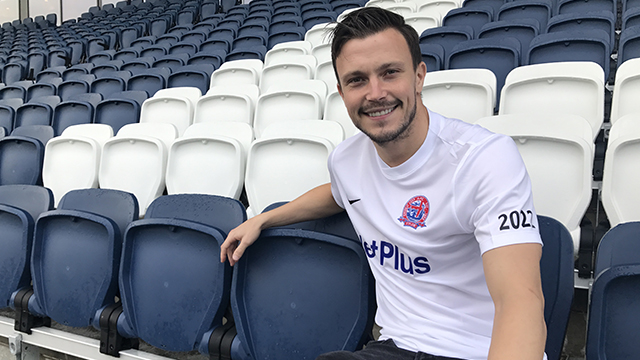 The 31-year-old has joined the Coasters until December 23rd.

Mangan began his career locally with Blackpool and has twice won promotion to League Two, first with Accrington Stanley in 2006 and again with Fleetwood six years later.

More success was to follow in 2014-15 when the striker helped Shrewsbury reach League One as runners up.

Coasters boss Dave Challinor believes the signing has come at the perfect time: “We needed options in forward areas because we are a little short at the moment. It’s one that’s been in the pipeline for a while now and it has come at a good time with Jack Muldoon’s suspension.

“He will train with us today for the first time and go straight into the mix for the weekend.

“I’ve known him for a long time and he was a teammate of mine many moons ago at Bury. His younger bother, Sam, is here too.

“I’ve kept in touch with him as he was with my ‘old club’ Tranmere and he is someone I would class as a friend. He is a character as well as a good footballer and goalscorer.

“His experience will really help out on the pitch and in the changing room too.

“He can play right across the frontline, he’s quick and he will look to get in behind so we are delighted to have him on board.”