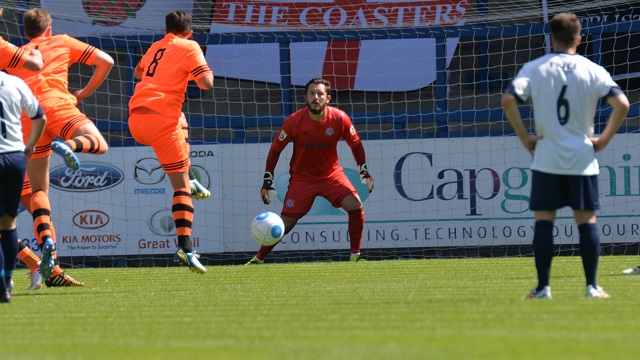 Coasters in safe hands with Rhys

New AFC Fylde goalkeeper Rhys Taylor was delighted to get his Coasters career off to the perfect start at the weekend.

Taylor was thrown into the starting line-up just hours after receiving international clearance and helped his new side to a hard-fought 1-0 victory at AFC Telford United.

The 26-year-old, who joined the club after a spell with Welsh side Newport County, began his career with Premier League giants Chelsea, spending five years as a pro at Stamford Bridge.

During his time at the Bridge, Taylor enjoyed loan spells with Queens Park Rangers, Crewe Alexandra and Rotherham United and following his release from Chelsea in 2012, Taylor had stints with Southend United and Preston North End before establishing himself as No.1 at Macclesfield Town. He spent two seasons with Macclesfield before joining Newport last summer.

The former Wales Under-21 international was one of six debutants for Fylde at the New Bucks Head Stadium and insists it was a huge three points for the Coasters.

“I’m delighted to have got the deal done in time. It’s the perfect start for me – a win and a clean sheet. That’s what I have come here to do, to win games.

“Talks have been going on for a few weeks now and I had been in for a couple of training sessions already so I’m just pleased to have it all sorted now.

“I want us to have the best defensive record in the league and Saturday was a great way to start.

“I thought our defence was brilliant and dealt with everything thrown at them and in particular I thought Dom (Collins) was exceptional. He won everything and was solid as a rock which is reassuring when you are behind someone like that as a goalkeeper.

“I personally think that will be one of the toughest 90 minutes we will have this season. They are a big tough team and they just played ‘boom ball’ all game, getting the ball into the box as much as possible, but we coped with it very well.

Taylor was also full of praise for star striker Danny Rowe, who once again popped up with the winning goal.

“We keep clean sheets, he scores and we will win games. It’s as simple as that. Hopefully we will only need to score once to win most games.

He’s got a hammer of a right foot and he can score from anywhere. It’s nice to have someone like that in the team, even when he’s not having the best game, he will usually pop up with a goal.

Speaking of making his home debut at Mill Farm this Saturday against Brackley Town, Taylor said: “I went up to the new stadium last week and it looks lovely. It’s in another league to the teams at this level. The plans that the Chairman have are very exciting so it’s good to be here for the foreseeable future.”