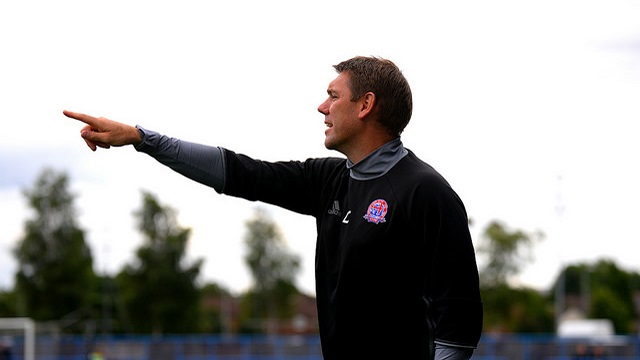 AFC Fylde boss Dave Challinor believes his side are ready for the new National League season after completing their pre-season schedule at Curzon Ashton on Saturday.

The Coasters were held to a 1-1 draw at the Tameside Stadium and although Challinor admits his side weren’t at their best, he was adamant that the Coasters are well prepared for the forthcoming campaign.

Challinor said: “Pre-season has been good. We said right from the start that the aim was to have as many bodies available on that opening game and we are in a decent position. If the season kicked off now then I would be happy with where we are at.

“The majority of decisions I have for the weekend I already had in mind. We know where we are at, although there is still some uncertainty around who will be available and we will have to deal with that. We still want a couple more bodies in.

“I was a little disappointed with our attacking play on Saturday. Defensively we are very good at the moment and out of possession we looked very fit and solid.

“In possession we were too slow and too deep. On the occasions that we did inject some attacking tempo we looked like scoring but that didn’t happen often enough.

“We were always going to make changes regardless of how the game was going. We still had a few trialists in there too so we were a little disjointed.

“We were too one dimensional when we are normally really free-flowing. We encourage the lads to play with a freedom and that’s something we need to work on this week.

“There were still some positives from the game as most of the lads have got another 60, 45 or 30 minutes in their legs

“We have an intense week now that is solely focused on Saturday’s game at Boreham Wood.

“When league games start, if we aren’t right at it then we will lose, that’s a fact. We are going into a really tough league with quality teams that are organised and we won’t find it as easy to score as we did last year.

“We have to get better at what we do and have different strings to our bow at times in terms of how we attack.

“I imagine the games will be tight and if we concede chances at the other end then we will get punished.

“This will be an exciting week with a real carrot at the end with the prospect of our first game at National League level. It will be a big occasion with hopefully a big crowd but ultimately it’s an occasion that we want to win.”