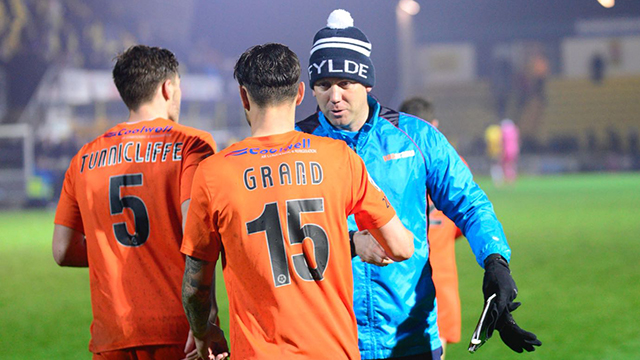 Coasters ‘found a way to win’

Heavy rain cast doubt on the already-rearranged fixture however two goals from Jordan Tunnicliffe and another from Jack Muldoon ensured there was no wasted trip for the Coasters.

Challinor’s side are now fourth in the National League with just three games to play following four consecutive victories.

Challinor said: “I thought we were poor for 20 minutes and we weren’t switched on, but we managed to get a foothold in the game after we equalised.

“We played some decent stuff at times despite the pitch but more importantly we really dug in.

“We switched it around midway through the first half and put Jonny (Smith) up front with Rowey and although he didn’t continue his scoring streak, I thought it Jonny’s his best game for us. He was outstanding and really worked the line well.

“It was tough out there with the pitch and the weather how it was but the good teams find a way of winning in those situations and we did that brilliantly.

“The goals came at really good times and gave us a lift each time. We were inevitably under pressure in the second half but we defended well, looked organised and still carried a threat on the counter attack.

“The third goal gave us some breathing space and we managed the remainder of the game perfectly from that point.”

Challinor was also keen to praise the traveling supporters who made made the 600-mile midweek round-trip.

“It’s a ridiculously long way to come for the supporters on a Tuesday night so huge credit to them. They make a big difference and we are really starting to build our numbers. Hopefully they continue to follow us and we continue to give them something to cheer.”