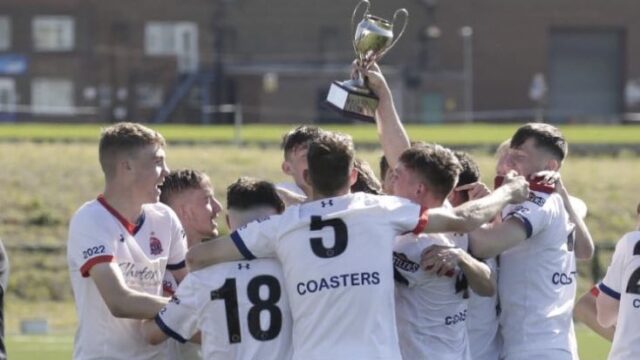 The Under-17’s and Under-18’s rounded off a fantastic campaign for AFC Fylde Academy, as they secured the North West Youth Alliance Cups over the weekend.

Conrad Prendergast’s Under-18’s lifted the trophy on Sunday afternoon when they overcame Altrincham at Burscough FC’s stadium. Two goals from Max Mccarthy and one from Rhys Long secured the triumph against Alty and put the cherry on top of what has been a magnificent 2020/21 campaign for Prendergast’s talented young outfit.

It is the run in the FA Youth Cup that will live long in the memory, but Prendergast spoke of the importance of creating a winning mentality after the game – something that trophies help to do. He told afcfylde.co.uk:

“I’m really proud of the group and what they’ve achieved this year – they deserved recognition for how they have conducted themselves throughout another stop-start season. It’s been a great year for the Academy and that victory tops it all of nicely.

“We’ve spoken previously about how important it is at this age, to build a winning mentality as a collective group and as an individual. It is our number one focus ahead of every game we play whether that be a friendly, league, or cup fixture. You have to be relentless with it and to be fair, these players have that in an abundance. It’s having that winning mentality that will help them as they transition into men’s football, whether that be at this football club or elsewhere.

“I think we have set the standard now as to what we want to achieve each year. There is a pathway here, which makes it a really attractive place to be for young players. We want to keep growing year on year, so our focus will now go on making sure we can compete at the same level next season.

The Under-17’s also enjoyed a memorable trip to Burscough FC when they ran out 3-1 winners against Tranmere on Monday. Strikes from Louis Thompson, Sam Keenan, and Hayden Ellis ensured the Under-17 North West Youth Alliance Cup came back to the Fylde coast.