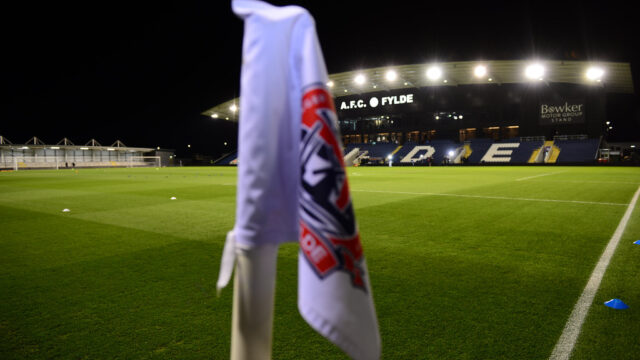 CLUB STATEMENT | Our views on the current position

Last night the National League presented us with a set of resolutions for us to vote on continuing the 2020/21 season. How we act and what we decide will have a massive impact on our future; and how we are indeed viewed both now and moving forward by our footballing peers. For clarity, AFC Fylde will vote to continue playing the 2020/21 season. Having received public funds to cover the loss of gate revenue in the first part of the season, we are of the opinion that we have a moral obligation to our fans and community to continue.

While we are all in acknowledgement that the country remains a fragile place, for many, football provides our only release. We firmly believe it is our duty, as a football club that sits at the heart of its community, to preserve that release.

Last week we circulated information to fellow National League North members regarding the availability of lateral flow testing and how it has now become very affordable. Rapid testing programmes are not perfect but provide a very useful tool in detecting infection in asymptomatic individuals. The costs are now down to £5.25 per test, and because of that we are testing twice a week, so for 30 players and staff it’s £315. Clubs do not need to test twice a week – that decision lies entirely with the football club – but once a week will cost £157.50. We also suggested that it would not be unreasonable to ask the players to pay/donate themselves if clubs are really struggling. Since that time, in fact early this morning, Sport England have now verbally given assurances that they will be paying for these tests in the future.

In Friday’s meeting, Sport England made it clear that a combination of grants and loans could be obtained. Those clubs who could justify grants would be able to access them, as a grant or potential hybrid type model. The terms of the loan are extremely favourable: 20 years term, 2% interest and a four-year payment holiday. With this on the table, we urge all clubs to make their case to enable them to receive a grant, loan or a combination of the two.

The burning question that Sport England needed to answer, was whether the Sports Winter Package Programme could be used to pay for player’s wages. This has since been clarified, with Sports England confirming that funds could be used for this reason.

To throw the towel in at this stage, will undoubtedly see our elite status brought into question. Without this status, clubs wouldn’t have received the first £10,000,000 grant, nor would we be offered the very attractive terms for the remainder of the season. You only have to look at Steps 3-6 where 850 clubs are being offered £10,000,000 between them for the whole season. Simple maths tell you that it’s £11,600 a club or thereabouts, while we have so far received a minimum of £90,000 per club for just three months. To reiterate, we must all fight to retain ‘elite’ status in order for us to be taken seriously as a professional football division.

Another factor to consider is our responsibility to do everything possible to continue. All clubs, big and small, have ambitions. If not, then why are we here? We, as a football club, have an ambition to win and to progress. We refuse to lie down because another obstacle has presented itself. It is our belief that all of us have a responsibility to our fans, sponsors and local communities.

We have been united throughout this pandemic, soldiering on through challenging times. There is an amount of pride and satisfaction in overcoming obstacles and achieving what seemed impossible at the time. If this marks the end of the road, will everyone be able to ask themselves did they really do everything they could to make this work?

On the walls of the Mill Farm Boardroom lies a quote: