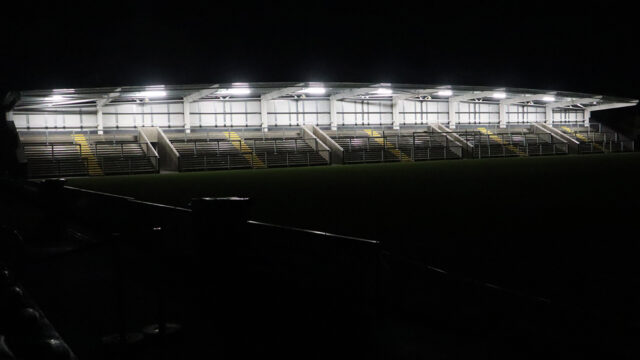 Following discussions with supporters regarding the operating of the new North Stand and the impact this has had on supporters in the East Stand, the Club wishes to make the following statement.

Firstly, we want to apologise for the miscommunication regarding how the new facilities would work on matchdays. Traditionally, supporters in the East Stand have been able to return to Bradleys and the West Stand kiosk for refreshments at Half Time and then return to the East Stand.

This has largely been a result of us being unable to provide hot food and alcoholic beverages in the East. However, a new Kiosk is under construction for the East Stand that will provide all the same facilities and more, but unfortunately will not be ready until the middle of March.

With the building of the North Stand, these facilities are not available now and the Club decided it would simplify things for the balance of the season by allowing supporters to choose where they stood by using the same season ticket, the only caveat being that once in the North Stand you couldn’t transfer out, just as once you are in you can’t transfer from the East Stand to the West Stand or vice versa. To the best of our knowledge, this policy is the same in all professional football grounds due to ground safety requirements.

However, as with many ideas of good intention, this has backfired, as fans in the East Stand want to use the new facility or go to Bradleys at half-time but still stand in the East, which they can’t. As many of you will know, this has caused great consternation, particularly at the last game against Guiseley, and as a result, left many supporters upset and frustrated.

The other complaint was around the age restriction for the North Stand, which was originally over 15, but at the request of the supporters, we changed it to over 12 at the beginning of the year. However, it seems this message was not clearly communicated.

After both internal discussions and consultation with our fans, we are now able to offer what we believe to be an amicable solution, and therefore until the new East Stand Kiosk opens, all supporters, including children in the East, will be able to use the facilities in the North Stand at half time and then return to the East.

Once again, we apologise for any confusion and upset we may have caused.