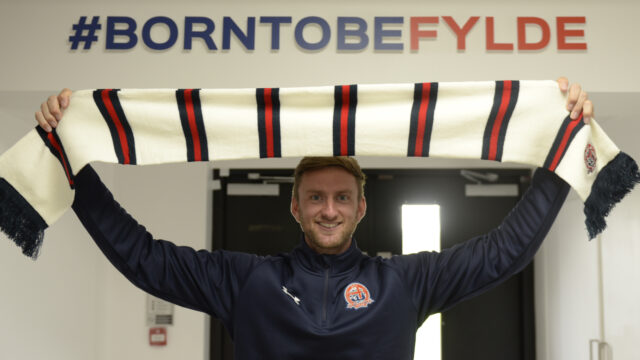 We are delighted to confirm that experienced goalkeeper Chris Neal has agreed joined AFC Fylde, subject to FA approval.

The ‘keeper arrives at Mill Farm after his Salford City contract expired this summer, off the back of a spell where he made 71 appearances across all competitions during his two-years at the Peninsula Stadium.

Beginning his career locally with Preston North End, Neal gained experience with time on loan at Tamworth, Shrewsbury and Morecambe, before making a permanent move to the Shrews in 2009.

A three-year stay there ended when the now 34-year-old opted to join Port Vale. A successful spell followed before further loans with Doncaster Rovers and Bury, before a first move to the Fylde Coast happened when signing for Fleetwood Town in 2016. Two years at Highbury and further experience under his belt ended when signing for Salford City.

Having amassed hundreds of appearances across the football league, the club is delighted to add experience and ability to a position it needed to strengthen.

Speaking with afcfylde.co.uk after completing the move, Neal said: “The manager phoned me up and asked what my availability was, so I waited until lockdown was over and moving here really appealed to me. The direction the club wants to go in is great. What happened last year with relegation we are hoping was just a blip, for some reason it was a bit of an off-season but hopefully we can rectify that this season.

“Nothing in football is a given, but having spoken with Jim it’s clear that the vision this club has is to be in the Football League and that appeals to any footballer. It’s a club that wants to go places and I want to be part of that, I can’t wait to get going now.”

Adding another key member of his squad, Jim Bentley said: “I’ve known Chris for many years and have always rated him as a good solid goalkeeper. He’s a top professional, a good person and has had success in his career so he knows what it takes.

“Chris is determined to add to that success here at Fylde and I am very pleased he’s on board with us.”