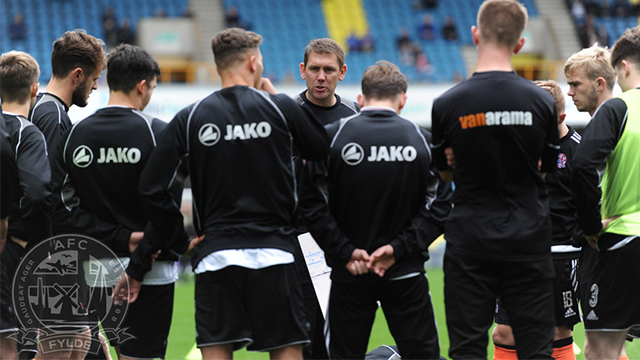 AFC Fylde manager Dave Challinor has urged his side to use the crucial 1-0 victory over Chorley at the weekend as a springboard for success.

The Coasters had been knocking at the door for much of the game before Danny Rowe netted a late winner and Challinor hopes his promotion-chasers can now kick on.

“We thoroughly deserved to get the goal and the win, but I guess we got a bit of luck at the other end with their penalty miss. For at least 60 minutes I thought we were completely in control of the game. We have to use this as a springboard now to get our season back on track.

“We are delighted because we challenged the lads to keep the ball out of our net today and try and nick one at the other end and that’s exactly what we did. We scored the most goals and conceded the least last season and that is a great recipe for success – one that we want to get back to.

“The number of crosses we flashed across their goal, particularly in the first half, was unbelievable. We want to play football and we always try to pass the ball, but we had that goal threat to go along with it too.

“It was great to see a some players back from injury and they made a massive difference. We still have a few missing so we can only get better. Tom Hannigan has been out for a long time and he was outstanding. He is a massive player for us and it was key to have him back in the team.”