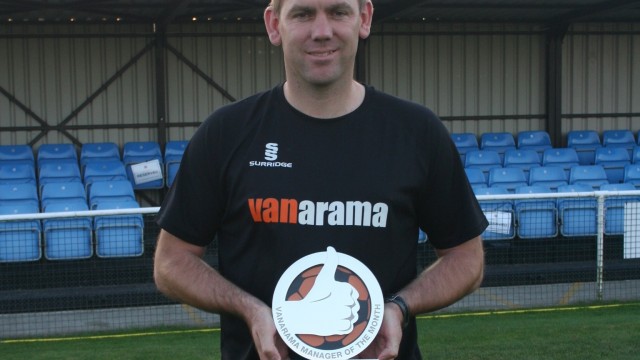 Chally Wins Manager of the Month

Vanarama are delighted to announce that the winner of the Vanarama Conference North manager of the month award for September is Dave Challinor of AFC Fylde.

AFC Fylde are currently on a six game win streak in the league, with four wins coming in September. AFC Fylde currently sit on top of the Vanarama Conference North league table.

On the announcement of the award Dave said, “On my birthday on Thursday, it was great to hear the news that we had received the Vanarama Conference North Manager of the Month Award for September. We had an excellent run winning four out of four in the league and progressing in the FA Cup.

“This achievement is reward for the all the hard work put in by everyone at the club.  I have to thank the players though for their dedication, work rate and desire that they’ve shown since we came back in what seems an age ago in late June.

“They have been fantastic, produced some exceptional football and got results that have been merited and long may this continue. We can all improve, individually and collectively and there’s a real ambition to do this.”

The official award panel had this to say, “In a very competitive division newcomers AFC Flyde have climbed the table into the top slot under the astute guidance of Dave Challinor. His squad have had a great month and rightly sit at the top of the table”

Congratulations Dave Challinor of AFC Fylde on winning this award and we wish him the very best for the rest of the season.